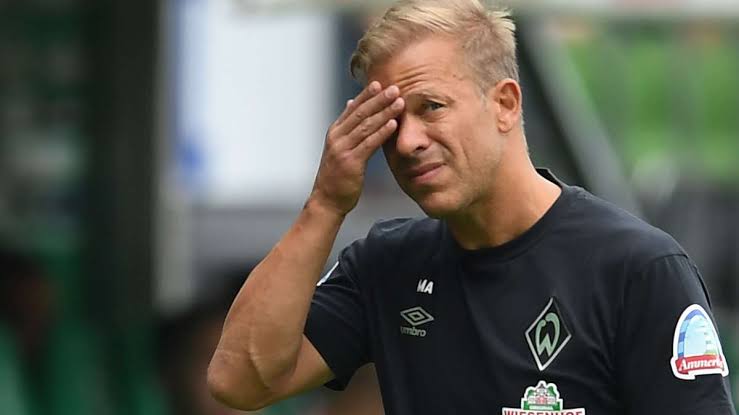 Former Werder Bremen coach Markus Anfang has been banned from football for the rest of the season by the German federation (DFB) for forging a coronavirus vaccination certificate.

Anfang initially dismissed the allegations but stepped down as boss of second division Bremen in late November.

This was after prosecutors had started a probe following a criminal complaint from the Bremen health office which had discovered irregularities in the certificate.

A prosecution spokesman said in early January that Anfang admitted to the charges via his lawyer.

On Wednesday the 47-year-old Anfang was banned for a year, backdated to begin Nov. 20.

From June 10 the ban will be served on probation meaning he could take a job from the start of next season.

Jung will also serve the latter part of his ban on probation from June 1.

“Markus Anfang and Florian Junge have significantly violated the role-model function as coaches through their actions,” said Hans E. Lorenz, the chairman of the DFB sports court.

The sentences were justified on the basis of “the confessions they made” while allowing them “the opportunity to go into a new engagement for season 2022/2023.”

The pair produced faked documents showing they had been twice vaccinated against the coronavirus, at the time removing them from testing obligations under rules in place in autumn 2021.

They also used their forged certificates to avoid quarantining as close contacts to Werder player Marco Friedl when he tested positive.

On examination anomalies in Anfang’s vaccination document were discovered.

It was revealed Anfang was coaching former club Darmstadt in a match in Würzburg on the date he supposedly received his first vaccination in Cologne.

Chelsea: I’m not happy with the situation, Lukaku cries out

Everything is going against Chelsea, Tuchel fumes