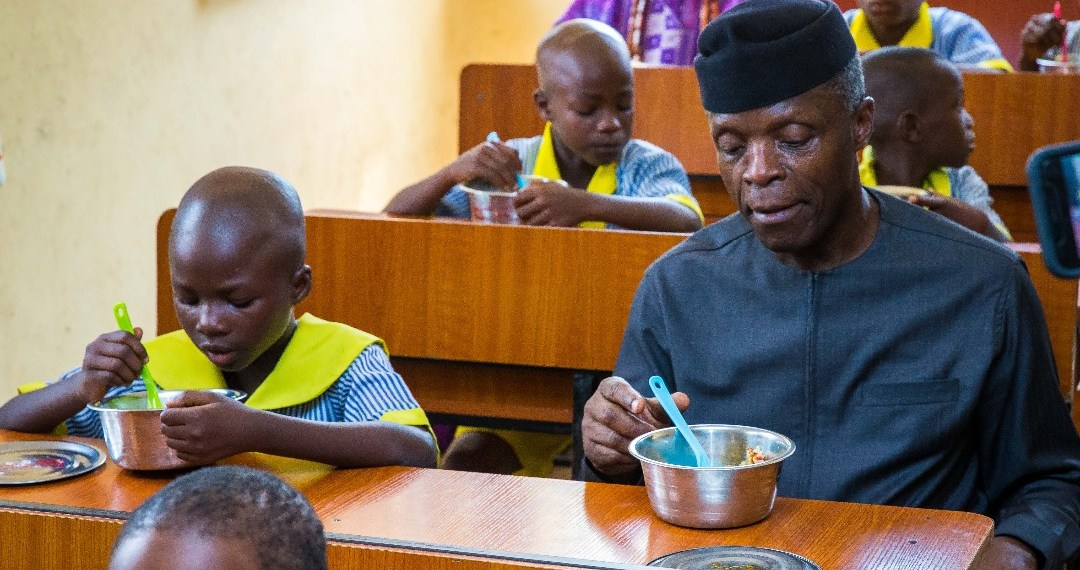 Vice President Yemi Osinbajo said on Monday that one of the reasons the Buhari administration’s Homegrown School Feeding Programme was conceived was to address problems of malnutrition, especially among primary school pupils.

Osinbajo stated this while receiving a delegation of Nigerian human nutritionists led by the Deputy Governor of Kano State, Prof. Hafiz Abubakar, at the Presidential Villa, Abuja.

According to Osinbajo, the Federal Government would be ready to collaborate with States where nutrition issues are most urgent in prioritising the implementation of the school feeding programme.

Already, 14 States are benefiting across the country, with almost 3 million pupils being fed daily.

The Vice President stated that the government would consider inaugurating the National Council on Nutrition.

He, however, urged the experts to come up with an action plan to effectively address the malnutrition challenges in the country.

Abubakar, who came with leaders of the Nutrition Society of Nigeria, had detailed the concerns of Nigerian professional human nutritionists on malnutrition challenges, and how Nigeria was faring regarding the global nutrition targets.

The delegation urged the Federal Government to inaugurate a National Council on Nutrition to address the situation.

Meanwhile, a release from the Vice Presidential Spokesman, Mr Laolu Akande, indicated that no fewer than 19,000 schools in 14 states were benefiting from the school feeding programme.

Akande stated that 2,918,842 school children from 19,881 schools in the 14 pilot states had so far benefitted from the school feeding programme, which is part of President Muhammadu Buhari administration’s N500 billion Social Investment Programmes.

He noted that a total of N6,643,432,789 billion had been disbursed by the Federal Government since the school feeding programme began late last year.

He said that with the commencement of a new academic session in September, it was expected that more schools would benefit from the programme, as more states would be added to the list.

The Vice Presidential spokesman added that it was in line with the Federal Government target that 5.5 million school children would be fed by the end of 2017.(NAN)