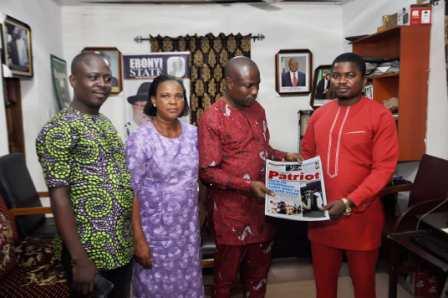 The new Acting General Manager of  Ebonyi State Newspapers and Publishing Corporation, publishers of the Nigerian Patriot Newspapers, Chief Dom Isute, has been charged to establish online channel for the newspaper to boost its readership.

The suggestion was made by the Special Assistant to Governor David Umahi on Media, Mr. Francis Nwaze in his office at the Government House, Abakaliki, on Wednesday when he received in audience the new GM and some members of his management team.

Recall that Isute recently took over as the next most senior management staff after the retirement of Larry Oyims, his predecessor in August.

Nwaze during the meeting commended the newspaper for its innovative reporting and developmental journalism which has tremendously added to the current quality leadership of Governor Umahi’s administration in the State.

While paying tribute to the Acting General Manager for utilizing his wealth of experience to boost the quality of the newspaper, he commended its government house reporter, for his unparalleled diligence and dedication to duty, adding that more could still be achieved.

Nwaze maintained that an online channel for the Newspaper would further enhance its status, its spread, coverage and readership at lower coat.

He pledged to collaborate with the Corporation to ensure that the Newspaper actualises all its aims and objectives.

Nwaze explained: “I believe that we can always do better.

“I want to assure you that we are going to do more in synergy to further improve the Newspaper through collaborative relationship with my office.

“Your Government House reporter here is very dedicated, diligent and always looking for the story, and I want to commend him for that.

“With him we can do more.

“But I want to suggest that you go online.

“You know, everything these days are going digital, and it does not cost much to float a website.

“Most National and domestic newspapers today have tilted towards the social media because they attract more audience there, and I want to you to tow the same line.”

Earlier in his remarks, Isute informed the SA that the team came to seek ways of harmonizing efforts and working together to promote the good works of the Governor which were quite glaring to all and sundries in the State.

He noted that he had already deployed his contacts within these few weeks of his assumption as the Acting GM to attract patronage for the Newspaper from Ebonyi Indigenes in the United States of America, one of which was the Nzuko Edda, USA.

The Acting GM Said the entire staff and Management of the Corporation have been working as a team to sustain the Newspaper and desired encouragement from all quarters.

He however, lamented that the corporation has not even one official vehicle and other operational facilities, a development which has greatly hindered its duties, and solicited the support of Nwaze in advancing the goals of the Newspaper house.

Isute stressed: “We want this paper to be coming out more regularly and be fully revived, being the only print media organ of the State government.

“Our ambition is to make it a weekly publication for now while in due course we are targeting Publishing twice in a week.

“We came because you occupy a pride of place in the collaboration effort of disseminating to the public, the good works of our Governor.

“Any way you can help us to achieve our objective is being solicited.”

The General manager was accompanied in the visit by the new Editor-in-chief of the Newspaper and immediate past State Chairman of the Nigeria Union of Journalists, Deaconess Veronica Osim; the government House representative among others.