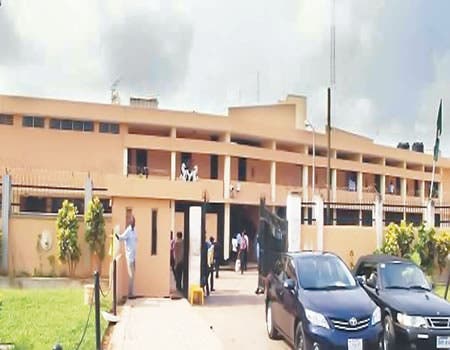 The case of Edo State House of Assembly has taken another dimension following the swearing in of 14 members whose seats were hitherto declared vacant by the speaker, Francis Okiye.

According to report, the seven lawmakers had in a suit with number FHC/PH/CS/100/2020 asked the court to stop the police and attorney general of the federation Abubakar Malami to stop giving protection to the All Progressives Congress (APC) lawmakers.

The plaintiffs also wanted the court to stop the 17 lawmakers from taking over the Edo state House of assembly Delivering his judgement on Friday, August 14, Justice I. M. Sani of the Federal High Court in Port Harcourt granted the substituted service of the originating summons and accompanying processes.

Edo state is still gripped by tension as the guber election draws closer.

Recall that on Thursday, August 6, impeached the speaker of the House, Francis Okiye, and his deputy, Roland Asoro.

The said impeachment took place at a private location in Benin City hours after security officials took over the state assembly complex. Before the impeachment occurred, the 14 lawmakers-elect whose seats were previously declared vacant were first sworn in.

Then three other lawmakers who recently pledged their allegiance to Osagie Ize-Iyamu of the APC joined them in the impeachment proceedings against the speaker and his deputy.

The federal government has since ordered the Inspector General of Police (IGP), Mohammed Adamu.

This action of the attorney general has received lots of reactions both for and against by Nigerians.