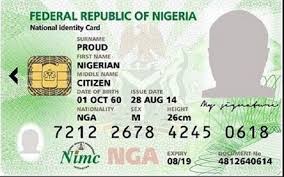 The federal government yesterday announced plans to replace the issuance of plastic national identity cards with digital forms of identification.

This decision was contained in the report of the Citizen Data Management and Harmonisation Committee submitted to President Muhammadu Buhari in Abuja.

The committee, chaired by the Minister of Interior, Mr.

Rauf Aregbesola, was set up in February following the imposition of temporary visa restrictions on Nigerian passport holders by the United States on February 21.

During the meeting yesterday, Buhari said Nigeria was making progress in its effort to reverse the suspension of the issuance of “immigrant visas” to Nigerian passport holders, adding that two of the six areas of concern raised by the US had been addressed.

Briefing journalists after submitting the report, Aregbesola said henceforth, holding cards would only be a matter of convenience, as only the issuance or possession of identification number would be mandatory.

According to him, once a national identification number (NIN) is issued to anyone, he is already captured in the data bank domiciled with the National Identity Management Commission (NIMC) and can be tracked anywhere.

“The card is just for convenience; the real thing is the number you have. With that number, you are on the databank. Everything about you is there. We are just upgrading it such that your DNA too will be there very soon.

Minister of Digital Communications, Dr. Ali Pantami, also said the era of card issuance was gone, adding that the emphasis is now on digital identification.

According to him, cards henceforth will only be for record purposes and hence, anyone with digital identification has all that is required for identification without having to hold a card any longer.

He said: “What the chairman is saying now is that we are no more talking about cards. The world has gone digital so that card is no more. Our priority now is the digital ID. It will be attached to your database wherever you are.

“So, if you can memorise it by heart, wherever you go, that central database domiciled with NIMC will be able to provide the number and every of your data will be provided.

“Now, our focus is no longer on producing cards. That card is only for record but what is important is the digital ID and if you notice, we have started using the digital ID on the international passport. Once you have the digital ID but not the card, we are 100 percent done with you.”

He added that digital identification would save foreign exchange while other forms of identifications by relevant agencies have equally been linked to NIMC.

“With your national ID, you are already identified. In the US, it is called social security number, the same with the UK and… They can control more than 1.3 billion people in about seven minutes. So, we have found that this card is strenuous.

“It is forex that is going out of the country, and we are in the 21st century and that is why we are focusing on national identification number and other identifications by other agencies have been linked to NIMC,” Azeez said.

In his remarks, while receiving the report, Buhari commended the committee for what he described as its sense of patriotism in the discharge of its mandate as he highlighted two areas also certified by the US.

‘‘I also note the progress made by Nigeria towards the removal of the visa restrictions as two out of the six areas of concern raised by the United States had been fully addressed, two are substantially satisfied while some progress is being made on the remaining two.

‘‘I am delighted that this progress, especially the uploading of lost and stolen passport and travel documents has been acknowledged by the United States Government,’’ he said.

A statement by the president’s media adviser, Mr. Femi Adesina, explained that the Aregbesola committee, among other things, recommended the establishment of a National Criminal Information Management, patterned after the INTERPOL model, and a National Criminal DNA Laboratory, to facilitate criminal investigation, administration of criminal justice and sharing of relevant information.

Buhari, who said citizens’ data management, was critical for socio-economic planning and effective service delivery assured the committee that the recommendations would be considered.

The president said: ‘‘An effective citizen data management system is critical for socio-economic planning, improved service delivery and good governance, as well as national and global security. It also has the overarching benefit of enhancing the integrity of the nation’s citizens’ identity instruments for the purpose of information sharing.

‘‘Accordingly, the committee’s recommendations on the strategies for harmonising existing databases, improving the infrastructure for the national identity database as well as a review of the supervisory mechanism of the National Identity Management Commission would be given serious consideration.

The president expressed the federal government’s commitment to sustaining the follow-up for the removal of the visa restrictions by the US and simultaneously developing a credible harmonised national identity data management system.

“The concerns raised cast doubts on the credibility of the nation’s citizen identity data management system,” he said, adding that “the scope of the committee’s assignment was expanded to include strategies to harmonise the various citizen identity data held by different government ministries, departments and agencies.”

The statement added that Aregbesola, in his remarks, expressed optimism that if the committee’s recommendations are fully implemented, visa restrictions imposed on Nigeria will be lifted and a lasting identity management system would be established.