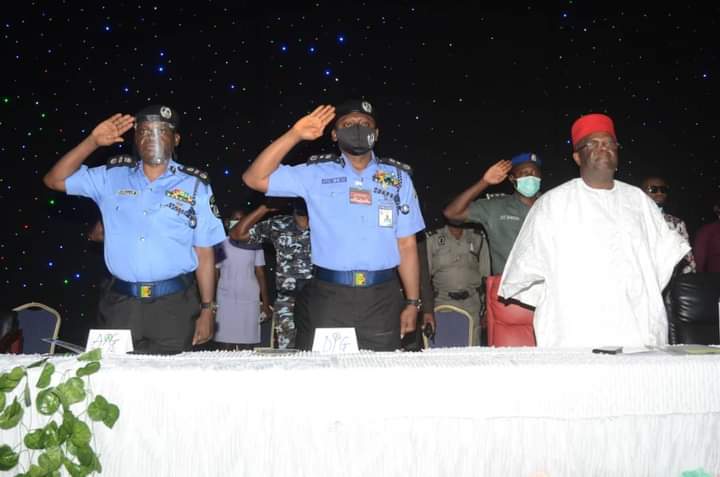 Umahi raised the protest in Abakaliki, the Ebonyi State capital on Thursday while addressing stakeholders during the inauguration of the State Community Policing Committee.

Recall that the Nigeria Police had recently created a new zone with headquarters at Ukpo in Dunukofia local government area of Anambra State  into which Enugu and Ebonyi previously in zone 9, Umuahia were integrated.

The Governor in his address noted that taking the State out of the Umuahia zone 9 Police Command to the new zone 13 was not acceptable.

According to him, it would be more convenient security-wise to allow the State remain in Umuahia zone which was more accessible and conducive for the people, rather than the rigourous road to the new zone.

He appealed to the Inspector-General to return the State back to the Umuahia zone where it previously belonged.

Umahi complained: “I had a little disagreement with the AIG, zone 13.

“Zone 13 is Awka, and we cannot belong to Awka…

“I moved our people from Calabar to Umiahia. I don’t know who smuggled us to Awka. I have told IG that we cannot be in Awka.

“One, the road, secondly the insecurity posed to our people going there.

“Let us remain in Umuahia which is more accessible to us in terms of the highway.

“So the best the DIG will do for us to know that we have a representative is for him to let IG know that we will remain in Umuahia.”

Governor Umahi who maintained that the State cannot fund the Community policing asked the Nigeria Police to not only train the personnel, but also provide the funding, adding that he had made the matter known to President Muhammadu Buhari in a meeting.

He noted that there was nothing like  Regional Joint Security outfit for the SouthEast zone but rather a cooperation among individual States for information sharing and collaboration for security management, adding that each State has some element of sovereignty.

He said: “I will continue to tell you, there is nothing like joint regional security. We can only work together in terms of sharing information.

“Every State is sovereign.

“Let nobody deceive you.

“If there is robbery in Enugu, through our cooperation,  they will let us know, and there are certain cooperation existing between us like the CCTV, sharing information through our tracking system, training and so on and so forth.

“But if you think that there is one recruitment centre to recruit people from the region for this security, you are lying.

“It’s all deceit and politics, but I don’t play politics…

“We will be telling the AIG: you asked us to fund the community policing, but it is not possible.

“The police must complete the training and will have to fund this community policing officers you are going to train.

“We had meeting with Mr. President two days ago,  and I told him there is no way this State can fund the community policing.”

Umahi who further decried the emergent security situation in Ebonyi State tasked the Police and other Security Agencies to prove their mettle by ensuring that robbery and other crimes were nipped to return the State to its former status as the most crime-free .

Umahi explained: “DIG, I want to report that I am still very unimpressed at the security situation in Ebonyi State.

He announced that he has put the job of the Commissioner for Internal Security and the Special Assistants on security on the line, warning that he would sack them if any other single robbery was witnessed in the State.

The State traditional rulers, civil society organisations,  various Security Agencies, the CAN and the Islamic Council also had representatives in attendance at the event.