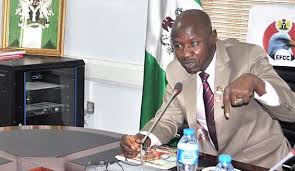 The embattled acting chairman of the Economic and Financial Crimes Commission (EFCC), Ibrahim Magu has denied ever threatening any judge, not even Justice Binta Nyako as alleged by the Attorney General and Minister of Justice, Abubakar Malami in a petition sent to the Justice Ayo Salami-led investigative panel.

According to Magu, “I have never threatened any judge. I also did not threaten Justice Binta Nyako. There was a case before her, the EFCC was uncomfortable with the treatment of the matter and raised some observations on the need to reassign the case to another judge. The Chief Judge of the Federal High Court looked at the EFCC’s complaints and exercised his discretion.”

Magu was quizzed for more than 10 hours, it was learnt, after which he was returned to the custody of the Force Criminal Investigation Department (FCID) where he is being detained.

Meanwhile, the panel has extended invitations to some top officials of the EFCC and Nigerian Financial Intelligence Unit (NFIU) to response to questions.