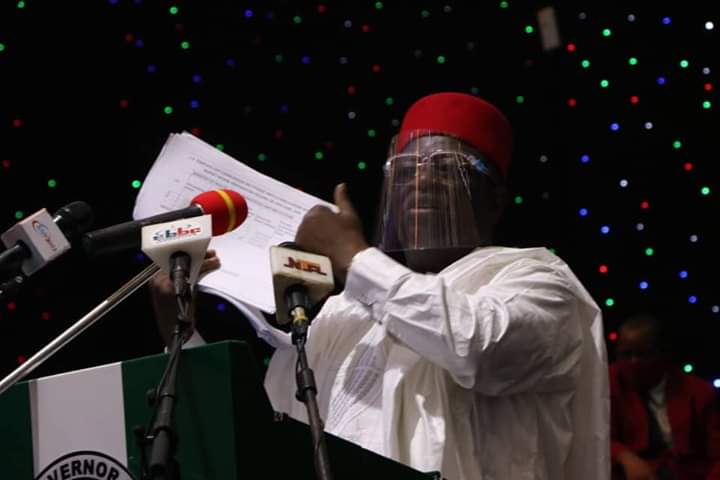 Ebonyi State government has proposed a downward review of its 2020 budget from the initial approved N178.

The review amounting to 26 per cent reduction in the budget was announced by Governor David Umahi on Wednesday during a public input/consultative meeting on 2020 budget organised by the government  at the Christian Ecumenical Centre, Abakaliki.

Adressing Ebonyi stakeholders drawn from the various economic, social and political segments of the State at the event, the Governor explained that the review has become imparative due to  COVID-19 pandemic which has dealt  deadly blow on global economy, as well as the dwindling oil price.

He noted that the consultative meeting was called in line with the federal government’s and World Bank’s  States transparency programme which requires that every segment of the citizens should participate in budget preparation so as to contribute and be better informed on how public fund should better be spent.

Umahi’ who sampled the 5-month performance, between January and May, of the initial approved 2020 budget with some Ministries and Departments expressed satisfaction with the level of recorded successes, adding that the budget had the prospect of hitting 100 per cent performance if not for the pandemic.

He noted that the Health sector in the reviewed budget acquired increased percentage owing to the need to effectively manage the Coronavirus pandemic in the State.

He further explained that the reviewed budget proposal would be submitted to the State House of Assembly for legislative approval.

Umahi explained: “In view of the unfortunate COVID-19 pandemic which has affected the global world economy of which Nigeria is not different; the fall in both oil price and  daily oil production; fall in IGR etc, the need has arisen to review the 2020 budget to accommodate realistically the effects of COVID-19 crisis management.

“In doing this, we have made some proposals in our review which we want to publish on different segments of our state to review to enable us finalize the process of revising the budget and its presentation to the House of Assembly for approval.

“So, what we have done here is what is called opportunity cost.

“Some MDAs budget  will have to go down and then those essential services that we intend to bring  especially in the fight against COVID-19 both the crisis management and the recovery had to come up, and that’s why you see health coming up largest and you see education also coming up because we have elements of crisis management in education.

“So, we are here before you with a budget review proposal that has the size of 26% reduction.

Governor Umahi at the event also announced the merging of the Ministry of Budget and Planning and the office of the Accountant-General to become one with the Ministry  of Finance and Economic Development.

The compendium of the proposed budget document distributed to all the various stakeholders at the event contained details of the budget as well as the organigram for the new Ministry.

Umahi however, assured that no civil  servants in the merged ministries would loose his or her job while the Commissioner for Budget would continue to retain his Commissionership post but redeployed to another office.

The Commissioner for Information and State Orientation, Barr. Uchenna Orji, and other members of the State Executive Council who spoke at the event extolled the unique leadership attributes of Governor Umahi which has raised the State from a state of negligence to that of national prominence.

Orji who described the event as a demonstration of democratic principles in governance, called on all and sundries to join hands with the Governor and his team to build an enviable Ebonyi State.

The National President, Nigeria Union of Journalists, Comrade Chris Isiguzo and some members of his team were also in attendance.