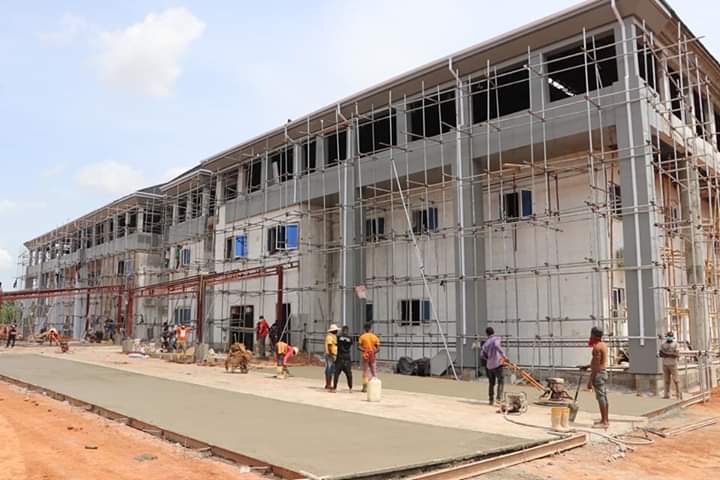 This is in addition to another 50-beded  fully completed and operational   Isolation/treatment centre located inside the unity square, Abakaliki.

The State Commissioner for Health, Dr. Daniel Umezuruike confirmed this to newsmen  at the AE-FUTHA shortly after accompanying Governor David Umahi on a supervision and monitoring tour of the projects.

The Commissioner explained that all the equipment  for the 300-beded  capacity coronavirus isolation facility have been provided and would be installed in the next one week after completion of finishing works.

He disclosed that a total of 160 coronavirus samples from the state have been tested so far and with results all negative, adding that another 60 samples from nearby states have also been tested.

He however noted that the results for other State have been sent to their origins and would be announced by them.

Umezurike said: “this complex you are seeing is the isolation/ treatment centre of infectious diseases precisely covid-19 in Ebonyi state and this structure was started just three-four months ago when the disease was discovered in China.

“After seeing the way the disease was spreading, His Excellency the Governor who reasons as if he knows tomorrow, said that one day this disease will get to every part of the world and that it is good to start preparing.

“He immediately started this structure and today we have gotten to 95% completion.

“What is left is to put the finishing touches, basically the fittings and the places will be good to go as an isolation ward.

“The facility is a 300-bed facility isolation and all the equipment have also been provided ready to be installed.

“We also have another isolation ward in the unity square and it is a 50-beded space.

“We completed the 50-beded space and discovered that it will not be enough and we had to commence the building of this 300-beded space that is nearing completion.

“We are also preparing, such that if we have any case, we should be able to contain it and that is what we are doing.”

The Commissioner further dispelled as mere rumour the reported outbreak of Cholera in Ohaukwu local government area of the State in which it was alleged that 10 persons died.

He said: “What happened in Ngbo, Ohaukwu local government area is that one woman living with the son died and they didn’t know the cause of death and they rought her and buried in her home town.

“After some days, they started having abdominal discomfort, vomiting and diarrhea.

“It started three days ago and two days ago, our team was there with the teams from the World Health Organisation, Medicins Sans Frontiers and Ananda Marga Universal Relief Team.

“We conducted an investigation and discovered that it was actually diarrhea, and with all the interventions and protocol, we sent more health workers there.

“It was only that women index case that we recorded mortality.”