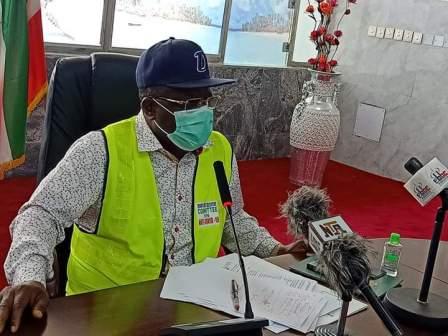 Ebonyi State Government has warned that any Ebonyi indigene who is caught breaking the strict border restrictions into the State would be subjected to at least four days quarantine and subsequent manual labour for breaking the State COVID-19 law.

This measure was announced by Governor David Umahi during a statewide live media interaction on Wednesday at the Old Government House, Abakaliki, the State capital.

The broadcast followed the outcome of an enlarged security meeting and  review of the various measures put in place by the government and the state COVID-19 committee to prevent the entrance of Coronavirus into the state.

According to the Governor, such returnees would only qualify to reunite with their families after having fulfilled the conditions and proven negative of the virus.

Umahi said: “We reviewed the issue of bike, and the lock down, 7pm to 7am.

“This review is such that the ban on motorbike is not lifted, and we have to bear the pains, and the state government working out plans to alleviate the suffering of those whose only source of living is the Okada.

“We are not happy about the leakages; we are still having people that are smuggling themselves in.

“But what we have divided now is that if you take all the risks and you come to the borders, and you are from Ebonyi State, you have to be ready to be quarantined for between 4 to 7 days at the stadium.

“After four days, you will be tested and believing God you will be okay, and after that you will do manual work for few days, because you have defied the law.

“So those at home should tell their people outside, to stay back because they can contact this by movement.”

Umahi directed that all political office holders or their aides should relocate to their local government areas to monitor compliance to precautionary measures while all civil servants should take advantage of the sit-at-home to embrace agriculture and engage in community service.

He reiterated his earlier warning to political office holders to be more proactive, adding that any index case discovered anywhere within the State traceable to laxities would cost them their offices.

He further stated that the government would place a complete lock down 200 metre radius on any Local government area where a positive case is discovered.

The Governor banned anyone from stepping out into the street within the State without protective mask, emphasizing: “No face mask, no movement”

He directed that all drivers of Petroleum products, food items, construction materials, drugs who were permitted entrance should be subjected to stricter measures before they are granted pass across the borders.

He further directed that Head of Service to intensify the compilation of names of Workers to be profiled for the Central Bank of Nigeria Agricultural fund in order to guarantee food sufficiency in the State.