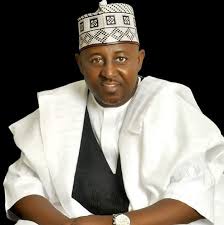 The death has occurred of Hajiya Hauwa’u Yakubu  in Keffi Local Government area of Nasarawa State the mother of Hon.

Aged 105 years, she died after a brief illness in her home peacefully.

She died and left behind eight children, many grand children, relations and friends to mourn her and among her children is Hon. Mohammed Yakubu Dikko a onetime chairman of Keffi Local Government Council and special Adviser to former Governor Umaru Tanko Al-makura and also special adviser to Governor Abdullahi Sule presently.

Until her death, she has been a role model in her community and dedicated disciplinarians to both her children and even those around her.

Speaking with newsmen during a condolence visit one of the children of the deceased Hon. Mohammed Yakubu Dikko described her demise as a great loss but expressed the delight she lived a life of discipline and the fear of God which she has succeeded in imparting the good conducts to her children and all those around her and prayed the Almighty Allah to grant her soul the repose by putting her in his Jannat Firdausi.

Meanwhile, Governor Abdullahi Sule has also visited the house of the deceased to condole her family over the loss and prayed the Almighty God to grant her soul the repose and strengthen the family to bear the loss.

Our man has also reported that the Emir of Keffi Dr. Shehu Muhammed Yamusa III has also sent a high powered delegation of his fifteen traditional title holders to condoled the bereaved family over the loss and prayed to God to grant them the fortitude to bear the loss.

In the vein, member of the Nasarawa State’s House of Assembly from Keffi West Constituency Hon. Baba Ali is among the prominent people that trooped into the house of the deceased to condole them over the loss.

Speaking during the condolence visit, Hon. Baba Ali described the deceased as a real mother, role model and a great disciplinarian whom her good works in life would ever remain indelible.

While praying God to grant her soul the repose he also prayed God to grant all that she left behind the strength to bear the loss.

The deceased has since been buried in Keffi in accordance with Islamic rites.