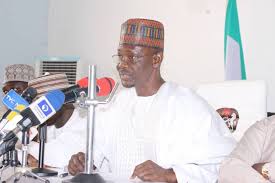 The authorities of Toto Local Government Council of Nasarawa State have taken concrete measures to ensure total compliance by people of the area about the partial lockdown imposed by the state government with a view to curtail the spread of the dreaded Corona virus in all over the State.

The Executive Chairman of the Council Prince Nuhu Dauda made the disclosure while speaking to newsmen in his office in Toto during the week, where he said the council has already swung into action towards ensuring compliance by the people.

According to him, as parts of the measures screening outfits have been established at every entry points of the local government especially that the areas share a common boundary with the Federal Capital Abuja and Kogi State, adding that hand sanitizers were also provided in all public places while awareness campaign on the need for the people to adhere to good hygienic practices have been intensified.

He stated that all public gathering places like markets, worship centres, social gathering places have been closed down adding that officials of the State’s government are supporting the local government in educating the people of the area about the dangers of the dreaded corona virus and the need for them to keep themselves away from it to stay safe and healthy.

Speaking about the level of compliance by the people of the area, the Chairman expressed his satisfaction with how the people take the issue of the disease with seriousness and complied with the various advices given to them by the health care providers.

The Chairman who expressed the delight that no single case of the disease was recorded in the area, assured that on its part his administration in collaboration with the State’s government and all other relevant stakeholders would continue to work together and pray for free-coronoavirus from the area the state and Nigeria as a whole.

While expressing his satisfaction with the positive response and compliance from his people, he urged them to continue to adhere strictly to the advice given to them by both the authorities and the health care officials. Meanwhile, our man who went round the area noticed that most of the public gathering places were closed down and the movement of people have been restricted.