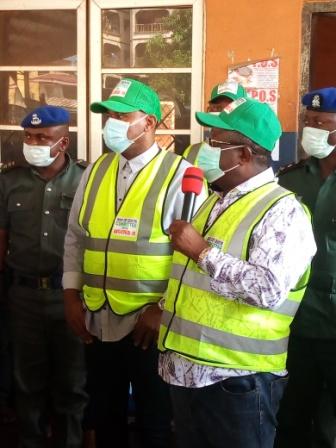 Ebonyi State Government has relaxed its ban on religious activities earlier announced as a measure to curb the spread of Coronavirus in the State.

The development was announced on Wednesday at the Government House, Abakaliki, as part of outcome of the State Executive Council Meeting

Briefing newsmen in that regard, the Senior Special Adviser to Governor David Umahi on Religious and Welfare Matters, Reverend Father Abraham Nwali, noted that the Governor magnanimously relaxed the ban to enable Christians resume Sunday worships beginning from Easter Sunday.

He however explained that all Church services must always be concluded between 8am and 12 noon with all instituted precautionary measures: hand washing, use of Sanitizers and protective masks fully in place.

Nwali, who is also the State Chairman of the Christian Association of Nigeria, further explained that the development  excludes vigils, gospel crusades and other religious outings, other than Sunday Services and liturgical Mass.

He added that the Governor also directed the CAN to monitor and ensure strict compliance with the above conditions with the view of enforcing and bringing offenders to book in line with extant laws of the State.

While appreciating the Governor for the great show of magnanimity, Nwali added that the Governor encouraged the CAN to seize the opportunity of the development and the spirit of Easter celebration to reach out to members in their various blocks with some palliatives to ameliorate the economic hardship occasioned by the COVID-19 pandemic.

Meanwhile, the Commissioner for Information and State Orientation, Barr. Uchenna Orji while briefing newsmen further on palliatives, said  the State government during the exco meeting considered and approved the sum of N1billion for the purpose of alleviating economic hardship imposed on the citizens by COVID-19 with its associated measures.

According to Orji, the sum would be deployed to purchase 400, 000 bags of 5 kg rice and other food stuff for distribution to the people, especially the poor and vulnerable group.

He added that approval was also given for Immediate production of protective masks for distribution to the citizens starting with 400, 000 pieces in the interim.

Orji, who is also the Acting Commissioner for Human Capital Development further informed that Governor Umahi also directed the immediate disbursement of the N2 billion Micro, Small and Medium Enterprise fund to enable entrepreneurs go into aggressive Agriculture and other economic activities as a means of cushioning the economic aftermath of the global scourge.

He emphasized that the State government has set machineries in motion to attract the conditional cash transfer of the federal government as further palliative to the people  while the Governor has directed the  concerned committees to liaise with the CAN, the Council chairmen, Councilors and the traditional rulers to identify the poor and the vulnerable mostly deserving the palliatives.

On the order banning burials and other social functions within the period of COVID-19 pandemic, Orji said the Exco resolved to offer a window to those wishing to urgently bury their dead to do so from the 9th to 20th April.

Such persons however, must obtain approval from the government via the office of the Commissioner for Information, while attendance to such burials must mainly be family members not exceeding 20 in number.

There must also be full observation and provision of all precautionary measures and apparatuses for the safety of attendees, failure of which, the government would hold the offenders accountable.

Recall that there is so far, no reported case of coronavirus anywhere in Ebonyi State.