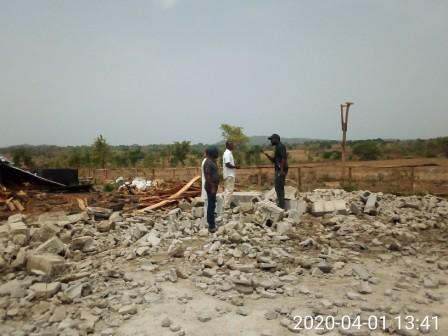 Two staff of Nigeria Farmers Group and Cooperative Society of Ga’ate farm center in Kokona Local Government Area of Nasarawa State have lost their lives and 15 others sustained serious degrees of injuries as a result of rainstorm that also destroyed properties worth millions of naira belonging to the farm.

The deceased persons were identified as Naomi Audi and Rabiu Yaro Sodengi attached with the rice processing unit of the farm.

Briefing newsmen in his office today, the Managing Director and Chief Executive Officer of the multi million naira farm Mr. Redson Tedhekhe stated that the two affected staff met their untimely death when the powerful windstorm pulled down the building they were inside while trying to evacuate some farm produces.

Mr. Redson who expressed sadness over the unfortunate incident stated that the 15 injured staff were rushed to Mumbasa Medical Center, Keffi were doctors were trying to stabilize them and expressed the hope that they would soon recover.

Speaking about the safety measures taken by the farm to mitigate future occurrence, the managing director stated that they are going to plant fast growing economic trees as well as train and retrain their workers on safety measures.

While describing the deceased as committed individuals, he condoled with their families and loved ones saying that they would continue to be remembered and honoured by the farm especially that their contributions are highly remarkable.

He then prayed for the quick recovery of their injured staff and assured them of their continued prayers and support, noting that the support of their host community even at this moment of grief is quite encouraging.

Mr. Redson then appealed to other staff of the farm to continue to be dedicated in their duties of feeding the nation, assuring that their labour and commitments would never be in vain.

Meanwhile, the Abaga of Toni Chiefdom HRH Lawrence Sylvester Ayih Oho II, the Kokona Local Government Council chairman Hon Saidu Kurki, the council’s secretary Hon. Augustine Ogaba amongst other prominent personalities have gone to the farm to condoled with them over the unfortunate incident which they  described as catastrophic and very  unfortunate.

Hon. Kurki however promised to inform the government of Nasarawa State about the situation and see how they come to the aid of the farm and other communities affected in the same aspect.

Our correspondent reports that the windstorm has caused a serious havoc to not only to the farm but the whole community as their roofs and buildings were destroyed.