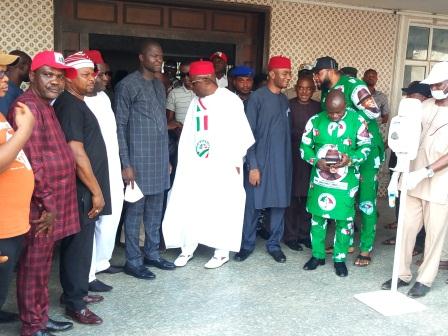 The Peoples Democratic Party (PDP) in Ebonyi State said it has commenced discussions, harmonisation and permutations towards electing credible officials that would run the affair of the party for the next four years.

The disclosure was made by the state chairman of the party, Onyekachi Nwebonyi while briefing newsmen on the outcome of its State Executive Committee meeting held on Friday at the Party’s secretariat, Abakaliki.

Recall that political activities within the party have been intensified following the recent approval for the congresses given by the party’s National Executive Committee (NEC) at its 88th meeting.

The timetable and schedule of activities for the 2020 congresses as released by the NEC are already operational.

Most states and zones, including Ebonyi and southeast are rife for the elective congresses having elected their current officials in 2016.

Nwebonyi, during the interaction, noted that the party was already taking measures that would ensure hitch-free primaries in electing officers who would run the affairs of the party for the next four years, adding that the build-up would culminate in achieving a worthwhile national congress, come 2024.

He also added that part of the outcome was the ratification of primaries held recently in the state to elect councillorship and chairmanship candidates of the party for the forthcoming April local government area elections in the state.

Nwebonyi explained further: “The major issue is to ratify, which we have done, the primaries done to elect our councillorship and chairmanship candidates for the forthcoming local government elections in the State.

“Moreso, is for us to put our house in order as we approach another set of congresses to elect the officers of the party, ranging from the Wards, the Local governments to the State, and of course, the zonal and national level in due course.

“So, we are taking measures that will ensure hitch-free primaries in electing officers who will run the affairs of the Party for the next 4 years.”

The State PDP boss further informed that the SEC  during the meeting, also constituted  a committee  to renovate the Party’s Secretariat complex which he described as a wonderful edifice built by the present leader of the party and Governor of Ebonyi State, David Umahi  during his tenure as State Chairman of the Party.

The SEC meeting was attended by Governor David Umahi, the Party’s National Assembly members in the State, Local government election aspirants as well as other invited stakeholders.