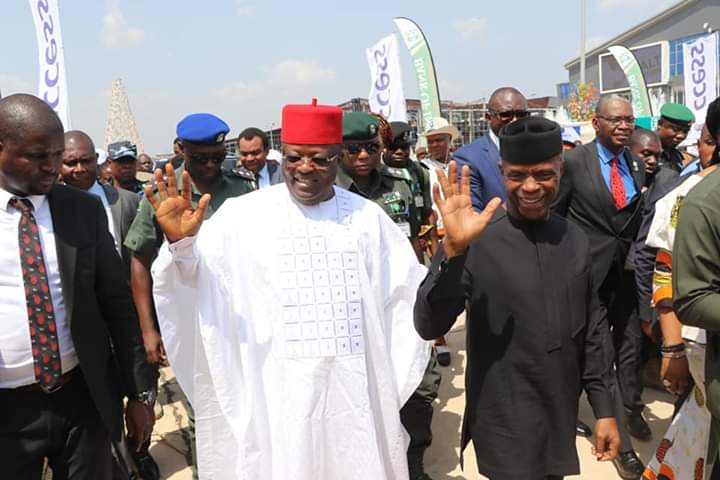 Nigeria’s Vice president, Professor Yemi Osinbajo has expressed delight over the plethora of medium and small enterprises springing up in Ebonyi State, describing it as a great hope for Nigeria’s economic emancipation.

Osinbajo made the remark in Abakaliki on Thursday while flagging off the Ebonyi State edition of the National Micro Small and Medium Enterprise Clinic.

Commending Governor David Umahi for his impactful leadership in the State, the South East and Nigeria generally, Osinbajo lauded the Governor for obviously creating enabling environment for the thriving of MSMEs in the State.

He called on budding businesses to take advantage of the federal government’s  zero-tax incentive for small businesses and 10 percent reduction in income tax for bigger businesses; other financial collaborations and encouragements to grow their businesses.

Maintaining that small businesses are important to the growth of  national economy, he emphasized that the administration of Muhammadu Buhari has introduced  unprecedented reforms aimed at enhancing ease of doing business in the country.

He admonished State governments to bring the services of MSME regulatory agencies such as NAFDAC,  Corporate Affairs Commission, Standard Organisation of Nigeria, among others, to the door steps of the State entrepreneurs by encouraging the establishment of their offices in their various States and  their partnership with the State regulatory agencies.

He added that such strategy would further enhance the ease of doing business in the States.

The Vice president assured that federal government under Mohammadu Buhari was committed to enhancing the growth of MSMEs across the country through provision of shared machines and facilities.

Osinbajo said: “I am encouraged by the number of outstanding SMEs and entrepreneurs in the State and I  have had the pleasure of interacting with the Governor alongside the his team, and I am impressed by the quality and creativity of all that is participating in this today.

“I am confident that these SMEs will bring about greater economic transformation of the State and indeed, Nigeria in general…

“What we want to achieve is what is known as shared facility,  which means a facility whereby a cluster of businesses will come together to share expensive machines provided by the federal government.

Governor David Umahi while welcoming the Vice president commended him for his innovational contributions to the National Economic Council, especially as regards road infrastructure which was key to the development of businesses.

He acknowledged that Nigeria at present was seriously challenged but expressed optimism that with the commitment of genuine leaders, the nation would surely overcome.

Umahi appealed to the Presidency to work towards improving the quality and status of Power supply in the South-East to encourage growth of businesses.

He also suggested that gas plants be established in each of the State capitals to complement energy source within the zone while the federal government should establish at least, one standard industry in each State.

While appealing for enhanced security in the South-East as very essential for the growth of MSMEs, Umahi blamed part of the security challenges on the nature of the country’s elections.

Advocating for electoral reforms, he noted that the activities of politicians who strive to win elections through the barrel of guns in spite of popularity have greatly aided insecurity in the country.

Others who spoke during the event,  including the Deputy Governor, Kelechi Igwe;  Commissioner for Information and acting Commissioner for human Capital development, Uchenna and his counterpart in Business Development, Stephen Odo, as well as the Special Assistant to the Governor on Human Capital Development, Mrs Ann Aligwe, expressed optimism that the visit of the VP would further enhance the performance of MSMEs in the State.

They attributed the business developments in the State to the business friendly environment instituted by the Governor as well as his superlative youth empowement programmes.

Aligwe summed: “I will therefore seek the permission of our dear Governor to request our very special guest, the Vice president, to use the opportunity of your visit to extend your fatherly blessings to the State by prevailing on relevant federal government MDAs to increase their various economic interventions in the different sectors of the State with a view to promoting growth, supporting the wonderful work of our dear Governor which will encourage him to do more. “