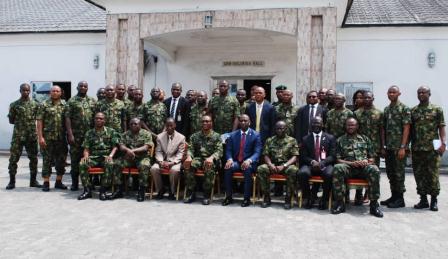 jpg 448w, https://www.nationspride.com.ng/wp-content/uploads/2020/02/Military-and-EFCC-officers-in-a-group-picture-on-the-margins-of-the-training-in-evidence-handling-being-conducted-by-the-Commission-for-military-officers-in-Nigerias-Delta-region-300x173.jpg 300w" sizes="(max-width: 448px) 100vw, 448px" />
Military and EFCC officers in a group picture on the margins of the training in evidence handling, being conducted by the Commission for military officers in Nigeria’s Delta region

The Economic and Financial Crimes Commission, EFCC, on February 25, 2020 began a two-day training  in evidence handling for officers of the Nigerian Army in the various brigades of the 6 Division, comprising the Division’s Headquarters, Bori Camp, Port Harcourt; 63 Brigade, Asaba; 13 Brigade, Calabar; 2 Brigade, Uyo;  16 Brigade, Yenagoa and 3 Battalion, Warri. Tony Orilade, Acting Head, Media & Publicity of EFCC on Wednesday made this known in a press release on February 26, 2020

Declaring the training open in Port Harcourt, Usman Imam, Head of the Port Harcourt Zonal office of the EFCC stated that the need for the Commission to secure 100 per cent conviction against oil thieves in the region underlie the capacity building workshop for the military personnel, who are the arresting officers in the illegal bunkering cases in the region.

According to Imam, when bunkering cases are lost in court on technical grounds, “it comes at great cost to the Commission, both tangible and intangible”.

“In terms of tangible cost, huge resources in money and man-hours are wasted. Perhaps, the most damning is the loss of confidence in the Commission’s prosecutorial abilities by the people.

“We want to change this narrative by ensuring that we achieve 100 percent conviction in all oil theft cases”, he said.

Imam explained that the training programme was designed to address the skill gap in evidence handling, identified with arresting officers in illegal oil bunkering matters. While stressing the importance of training and re-training in building the capacity of law enforcement officials, the Zonal Head declared that, “over the next two days officers and men of the 6 Division Nigerian Army will be exposed to all the intricacies of criminal investigation and the standard operating procedure on arrest, detention and prosecution of persons and equipment involved in economic crimes, especially illegal oil bunkering. They will also be taken through evidence gathering, care and custody of suspects and exhibits, and lots more”.

In his remarks, the General Officer Commanding, 6 Division Nigerian Army, Major General F. O Agugo commended the EFCC Zonal Head for swiftly executing the pledge he made in January during his courtesy visit to the Division, to train its officers. “I thank the EFCC for coming to teach us the basics of how to make their work more efficient”, he said.

He urged officers nominated to participate in the programme to consider it a great privilege. He charged them to be attentive and be prepared to transfer the knowledge acquired during the two- day training, to others in their units and formations who were no lucky to attend the workshop. About 23 officers, drawn from the brigades in the 6 Division are participating in the workshop.