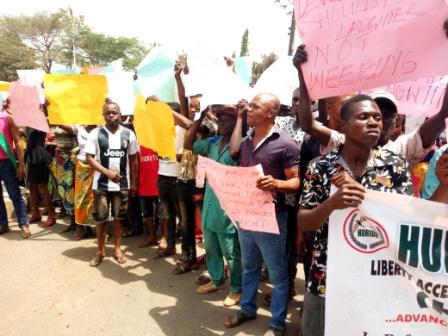 As controversies emanating from Ebonyi State Government’s acquisition of land for its international airport in Ezza land continues to heighten, a non-governmental organisation known as Human Rights, Liberty Access and Peace Defenders Foundation, on Monday, took their protest to Government House, Abakaliki over the same matter.

The group led by its state chairman, Sampson Nweke and its legal head, Nnamdi Ekigbo, with some affected villagers, carried placards with various inscriptions registering their disappointment and anger over what they described as insensitivity of government to the plight of those displaced by the project.

Nweke and Ekigbo who took turns to speak on behalf of the protesters presented  gory pictures of the displaced villagers whom they said now lives like rodents, under trees and open spaces with their families.

They alleged that the state government has refused to either compensate them adequately or relocate them properly as enshrined in the constitution, a situation which has continued to expose them to untold hardship, health and environmental hazards.

According to them, over 8,000 houses had been demolished in the exercise by their investigation, leaving about 30,000 persons homeless.

They decried the fact that the community leaders in the area had compromised their integrity thereby worsening the people’s predicament, pinching them against the government.

They further alleged that the compensation being orchestrated as given by the government was a mere caricature as some of the victims only got between N17,000 and N37,000 which can hardly buy a bundle of roofing sheet.

Moreover, they alleged that they had written the Governor as well as the State House of Assembly over the fate of the displaced in the affected villages with no response from either quarters.

As Human Rights Organisation, they explained that they have assessed the deplorable conditions of the people vis-a-vis government insensitivity and have decided to take peaceful protest to Government House to draw sympathy from the Governor for the people.

Nnamdi Ekigbo summed up their position thus: “Nothing was given to the people.

“And I know that the constitution was very plain on what the government should do if they want to compulsorily acquire a land for overriding public interest.

“That condition include, but not limited to adequate compensation of the people involved.

“Relocation of the people to a place they will be, and be comfortable.

“In fact, the Supreme Court, in its interpretation of adequate compensation stated that you must compensate such people in a way that they will return to the status quo before the demolition.

“We went there, some were sleeping in wheel barrows, in open places, under mango trees.

“We wrote to State government and they paid deaf ears.

“We wrote to the Speaker, the same thing.

“We cried to every corner and no response.

“That is why we organised this peaceful protest to know whether the government actually know what is happening because from our investigation, only N87 million was released, according to the Governor for over 8,000 homes where over 30, 000 persons were affected.”

Addressing the protesters, the Chief of Staff, Government House, Emmanuel Offor Okorie, on behalf of Governor David Umahi, commended the protesters for their peaceful conduct.

He however noted that it was not the duty of the NGO to speak for the people but rather that of the people’s opinion, political and community leaders.

He further admonished the people to articulate their grievances in writing, and forward to his office for adequate attention, stressing that such should not emanate from the Human Rights group.

Meanwhile when contacted over the development, the Commissioner for Internal Security Border Peace and Conflict Resolution, Stanley Okoro-Emegha dismissed the protesters as sponsored enemies of government.

He maintained that Governor Umahi deserved commendation for the airport project rather than senseless protests, adding that the project was for the overall benefit of the people.

He emphasized that all projects must always be sited on people’s lands and not in the air, adding that the government has fulfilled all due processes regarding the acquisition of the land for the project.

Emegha said: “There is no where you can build airport on air. It is on the ground.

“If you go to Owerri, Enugu among other places, there are airports, and those lands on which they were built belong to people.

“And everybody knows that there is a process through which government acquire land, and our government is such that has human face.

“There is no way we can embark on such project without following the normal process.

“This is just the beginning.

“By the time the airport comes into full completion and becomes operational, it is the people that would also enjoy it most.

“It will also bring further development.”

About five communities, mainly in Ezza North local government area were affected by the displacement, including Umuezoka, Umuoghara, Oriuzor, Okaleru.