Only the lazy are hungry in Ebonyi, says Governor Umahi 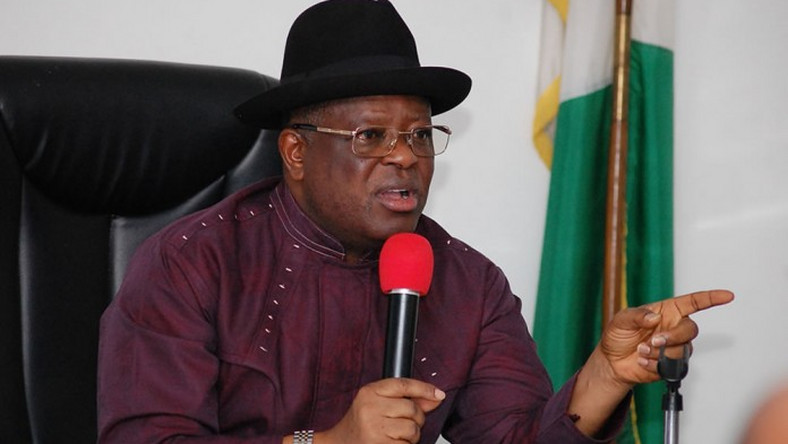 Governor David Umahi of Ebonyi State has debunked insinuations from some quarters alleging that the citizens of the state were being ravaged by poverty, hunger and hardship.

There have been background murmurings from some sections of the public across the state in recent times alleging that there was much hunger in the land amidst the great infrastructural projects credited to the Governor.

However, while addressing a large number of Universal Basic Education Board project contractors recently at the Government House, Abakaliki, the Governor, obviously reacting to the development maintained that only the sluggards are hungry in the state.

He re-emphasized that there has not been any economic flight in the State as all earnings had always been engaged in empowering the indigenous people through various contracts.

He commended the state UBEB for splitting the N7.6 billion project to reach many contractors in the state, describing it as another way of helping the people.

While cautioning the contractors to ensure that they execute quality jobs or risk losing it, he emphasized that his administration would never succumb to sharing money in the state to few privileged individuals as a means of political patronage.

He assured the contractors that any certificate generated and certified would be paid promptly to enable them complete the projects in record time.

He further challenged the UBEB chairman to ensure that the income tax from the contractors and their workers were deducted from source before payment,  to ensure that the state was not short-changed in the area of internally generated revenue.

Umahi further explained: “We are very concerned about the quality of work we do in Ebonyi State now.

“These jobs cutting across so many people in the state is actually a way of helping our people.

“We believe that the way UBEB did it, accommodating many contractors will empower our people, and anybody who says our people should not be empowered is a joker, because empowerment is very important.

“When people are empowered, there will be less crime.

“This amount of money, N7.6 billion that would be plunged into these projects will help the society.

“So, when people say we are working but there is hunger, those guys should honestly re-examine themselves because there is no money that comes in every month in this State that flies out.

“We have only about two to three expartriats working on our roads.

“So,  how else do you empower the people?

“We empower people through activity, and I challenge anybody who says there is hunger in the State.

“It is hunger for those who are very lazy.

The Bible says, let him that does not work, not eat.”

The State Commissioner for Finance, Professor Ogbonnaya Chukwu commended the Governor for his passion in empowering indigenous contractors, assuring that his Ministry would collaborate in ensuring that the jobs meet the standards.

The meeting was attended by the UBEB Chairman, Chief Hyacinth Okpor and his Board members; State Executive Council members and the project contractors.