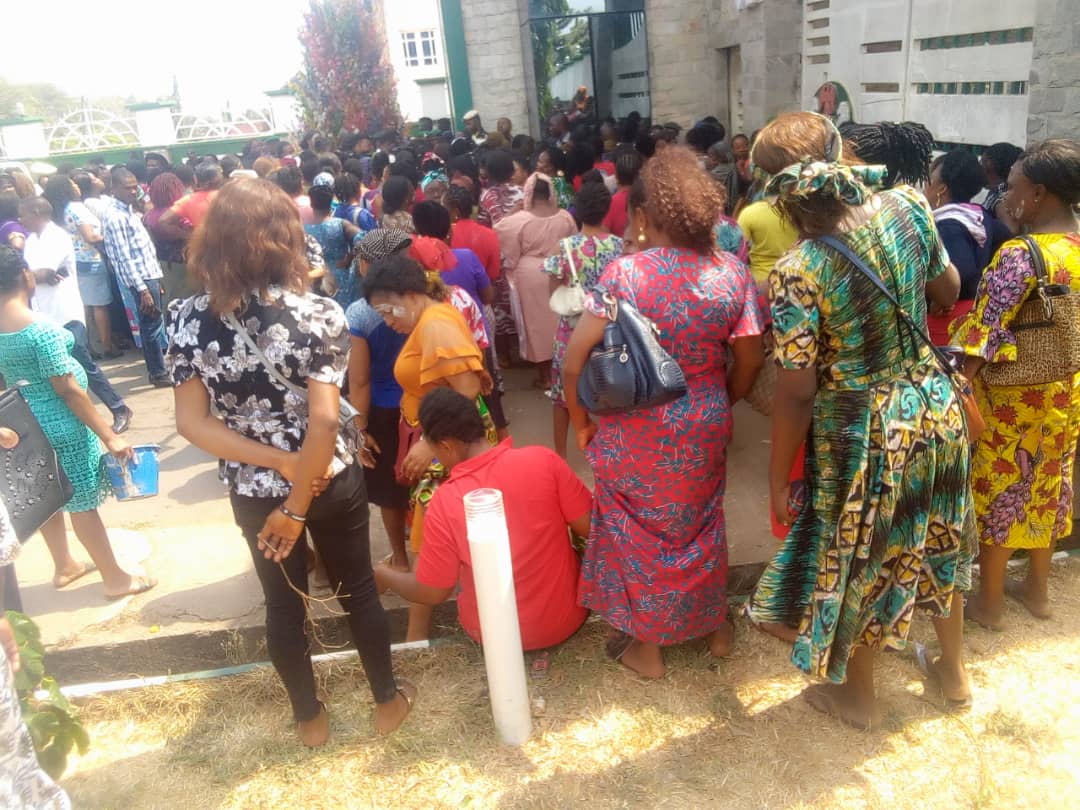 Women traders from Abakpa Main Market, Abakaliki, on Wednesday, February 5, took protest through the major roads in the state capital, to the Government House, Abakaliki, over alleged irregularities emanating from shops allocations at the newly constructed Margret Umahi International Market.

Recall that state government had fixed February 10 as the deadline for relocation of all classes of traders from Abakpa Market to the International Market.

Steps towards fulfilling the order were recently commenced with the process of shop allocation to the traders in the new market.

Meanwhile the women numbering over 300 stormed the Government House gate wailing and rolling themselves on the ground, alleging shortchange in the entire exercise.

They lamented that the government officials involved in the exercise deliberately deprived them the shops despite their payment of the sum of N50,000 fee each.

They also alleged that those who were allotted shops at the International Market on Monday, in the name of Abakpa traders were traders from villages, probably relations of some named government officials involved in the exercise.

The women further lamented that market leaders imposed on them by the powers that be, have continued to betray them and turning against their collective interest.

They however commended the developmental strides of Governor David Umahi which they described as glaring, but noted that much still needed to be done in the market to make it fit for business.

They called on the state government to allow more time for the relocation even as it intervenes to ensure that the shops were given to the real and deserving traders.

The women’s spokesperson who did not disclose her name explained: “We are ready to move to the International market, and we like the structures the governor has put in place in the state.

“But we have been receiving conflicting reports about our relocation to the International market.

“Different people will come at different times and say Governor said this and that, and what they are saying is different from what Governor Umahi told us in person.

“When we met with the Governor in December, he told us that we will move because where we are presently is not conducive.

“We said no problem, but asked him the conditions, especially for those who have shops at Abakpa main market, and he assured us that the issues would be settled when we get there.

“The Governor also said he would give us shops at the International market without pay for one year, after which we will negotiate how the payment would be and we accepted.

“But now, it’s not what the governor said that was done.

“Where Abakpa women were supposedly allotted shops have been taken over by others.

“When you go there to lock the shop you will discover that another person had already locked it.

“Traders from villages were there warning us not to touch any shop.

“We are asked to vacate our shops at the main market, but the ones that the Governor promised to give us, we didn’t see.

“We are not treated well.

“Rev. Fr. Nwali on Monday told us that if we don’t know where to keep our goods, we should take them home, adding that it’ was not compulsory that we will all do business.

“That was when we realised that the whole thing was getting out of hand, and that we needed to go and report to Bishop Michael Okoro in charge of Abakaliki Catholic Diocese, after which we would come to government House to hear from the governor and to know if he had been the one sending all those that said they came to us in his name.”

The women asked the government to either allot shops to them in the International market or allow them continue their businesses in the Abakpa market if they had decided to give the shops to the village women instead of them.

They equally disowned some government officials imposed on them as leaders asking them to stop parading themselves as such as they were not market women.

They also complained that when they went to the new market on Monday, they discovered that it was not yet ready.

The spokesperson added: “there is no security, bank; dust everywhere, and the Monday deadline is already here.

“The governor should please bear with us and allow us to stay in the main market while he finishes building the International market.

“We are behind him and we support the work he is doing, but let him finish building the market and allot our own portion.

“That is why we are protesting today.”

The Special Assistant to the Governor on Security and Utility, Abakaliki Urban, Nchekwube Aniakor, who addressed the women, assured them that their concerns would be addressed.

He insisted that the government’s relocation order cannot be violated as it was for the good of the traders.

“Tomorrow by 10am, come with your executive to the International market.

“I want you to know that you are still part of this government.

“We will meet there, but the most important thing is that you people will move.

“The Governor will not take your shops, and those who have shops will be given shops at the International market.

“In  Ebonyi we deal on standards and that International market is the best in the country even in West Africa.

“So it will be good for you people to move to that place.

“There is no place such movement will occur that there won’t be complains, but we will look into your complains that is our assurance and we promise that everyone will get shop there on or before the deadline” he assured.