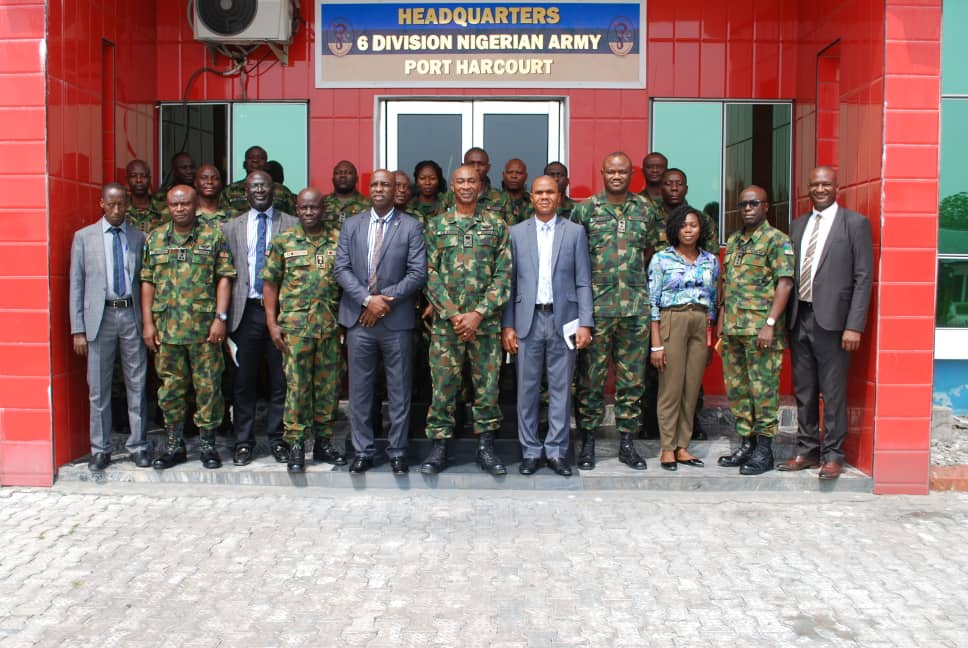 In a bid to enhance the prosecution of suspects arrested for involvement in illegal oil bunkering in the Niger Delta, the Economic and Financial Crimes Commission, EFCC has offered to train officers of the 6 Division, Nigerian Army in the intricate art of evidence gathering and handling to guarantee successful prosecutions in court.

In a press release issued by Tony Orilade, Acting Head, Media & Publicity of EFCC, Usman Iman, new Zonal Head of the Port Harcourt office of the EFCC made the offer today, January 23, 2020 when he led senior officers of the Commission on a courtesy visit to the General Officer Commanding, 6 Division Nigerian Army, Major General F. O. Agugo

According to him, the training will ensure “that evidence are secured to enhance prosecutions as lawyers often look for loopholes to frustrate the trial of oil theft cases.”

General Agugo who expressed delight at the offer mandated a team comprising the training commander and the Division’s legal officer to work with the EFCC in working out the fine details of the intervention.

“We welcome the training proposals…why should will kill ourselves in the Creeks only for some unscrupulous lawyers to rubbishy our efforts. We will go out of our way to help you achieve convictions,” he said.

Earlier Imam told the GOC that he was at the Division to acquaint himself with him and his officers and to solicit for their support and collaboration.

He expressed satisfaction at the existing relationship between the Army and the EFCC . He however called on the GOC to consider releasing his officers to testify as witnesses in oil theft cases.

“We have a situation where under cross examination in court you are asked whether you are the arresting officer and you say no, and your evidence become hearsay”.

He further harped on the need to preserve evidence and to ensure that drivers of trucks with stolen or illegally refined products are apprehended.

While thanking Imam for the visit, General Agugo, who described the Zonal Head, as ” a friend and brother”, pledged closer collaboration between the Army and the EFCC.

He said the Army has no choice but to support the EFCC in line with the vision of the Commander- in-Chief of the Armed Forces, President Muhammadu Buhari that, “If we don’t kill corruption corruption will kill Nigeria”.

“He said both the Army and the EFCC have a common purpose which is linked to the survival of the nation, and “we should work together.”