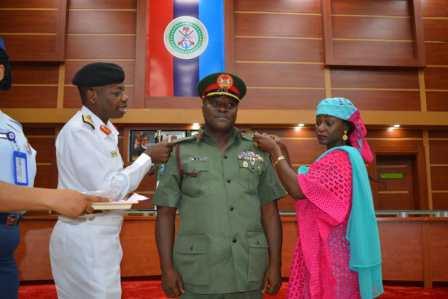 In one of his famous speeches, President Abraham Lincoln said, “For the service you have done in this great struggle in which we are engaged, I present you sincere thanks for myself and the country.

“I almost always feel inclined, when I happen to say anything to soldiers, to impress upon them in a few remarks the importance of success in this contest.

“It is not merely for today, but for all time to come that we should perpetuate for our children’s children this great and free government, which we have enjoyed all our lives. I beg you to remember this not merely for my sake, but yours. The nation is worth fighting for, to secure inestimable jewel”.

The above assertion can as well be attributed to Brigadier General Barnabas Yakubu Sakaba, an indigene of Zuru local government area of Kebbi State, because his fame in the military is becoming unique due to the fact that he never let go the opportunity that comes his ways right from his childhood up to date.

After his primary and secondary schools respectively, he was admitted into the Nigeria Defence Academic (NDA), Kaduna as a member of 38 Regular to study a degree course in 1986 and obtained a Bachelor of Arts degree in History in 1990 and was commissioned 2nd Lieutenant on 21 September 1991.

General Sakaba held so many military responsibilities which include ECOWAS Monitoring Group (ECOMOG) in Liberia for peace keeping and later peace enforcement with NIBATT 16.

On return he was posted to 81 Guards  Battalion, Keffi from 1995 to 2000, then to 81 Guards Battalion Makonla Barracks in Ibadan and then to 2 Division Garrison as SO2 GI/G4.

General Sakaba was then posted to Multi National Joint Task Force (MNJTF) in Baga from 2000-2004 and later to 72 Paratroop Battalion, Makurdi  as the Battalion 2nd-in-command. He was the Commanding officer 93 Battalion Takum where he commanded the troops in United Nations peacekeeping Mission in Sudan.

He was Chief instructor Tactics Wing, Waterman ship Training Wing, Research and Development then he was posted to Defence Headquarters Directorate Procurement in 2017 just to but a few. He is currently serving in OPSH as Chief of staff and has attended several courses too numerous to mention in the discharge of the said responsibilities

In an exclusive interview with NATION’S PRIDE during an occasion organised by his friends held at Sabon Gida in Kokona local government area of Nasarawa State, recently to celebrate with him as he got elevated to the rank of Brigadier General in the Nigeria Army, Sakaba described the said promotion as an act of God, adding that he passed several experiences; numerous to mention in life before attaining to his present position.

In his words; “My distinguished army officers and Generals, my family and the rest of personalities here, I just want to appreciate your presence and thank you for honoring me. For those of you who will not understand the miracle of being in this position today, which someone described as “the age wonder of the world”. I don’t know how, but I want to assure you that I thank God Almighty.

“We knew where we passed through and where we are now. I also know that promotion comes from God, though one need to work hard, but certainly it is God that gives. There are some army officers here who are expecting their promotions by the special grace of God I assure you that by this time next year we shall celebrate yours too, that is my prayers for you.

He said his friends decided to organize the reception for him in Nasarawa State, because the state is his second home after Kebbi State. He thanked the organizers for their good gestures towards him and all those who attended the occasion assuring them of his commitments towards discharging his responsibilities to the overall development of the nation.

In his remarks at the occasion, the elder brother to the celebrant, Mr. Amos Sakaba said, “Cry will persist in the night, but joy comes in the morning. So this is an example of what God can do. Promotions do not come from the north, east, west or south, but from God. A man can’t receive anything from fellow being except from God, and that is what happens to my brother Brigadier General Barnabas Yakubu Sakaba”.

He continued,” My standing up here is just to appreciate all of you. Your presence here shows that my brother is a grassroot man and has the goodwill of the people around him as well as in the safe hands. So for you been here you are going to be established by God”.

On their part a veteran journalist Alhaji Idris Loko and Some army Officers who spoke at the on behalf of the occasion described Sakaba’s promotion as timely and well deserved owing to the fact that he is a disciplined and unbiased leader, urging him to continue rendering his best for the country in the security sector in order to ensure the nation’s safety.

Earlier on the organizers of the said occasion headed by comrade Abdullahi Abubakar Suleja said the organized the reception for the celebrant due to his good gestures to humanity and the nation at large.