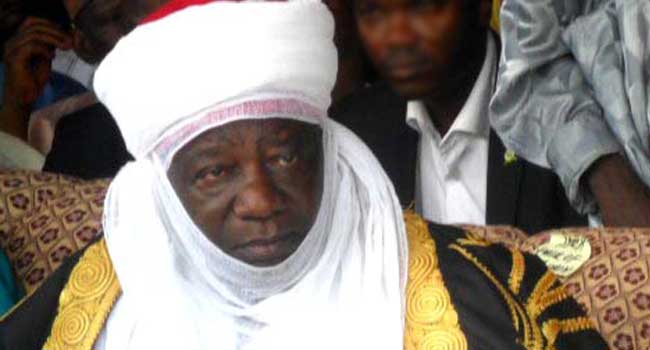 It was all pomp and pageantry on Friday in the emirate city of Ilorin, the Kwara state capital as the seventh Daudu of Agaka, Alhaji Hanafi Omotosho Kawu was installed.

The new Daudu Agaka is from the Shitta Alimi Oroganloye family ruling house.

The Agaka ancestral home of the new Daudu, where the event took place, was a beehive of activities.

The coronation ceremony was punctuated by Qu’ranic recitations, sermon, lecture and massive treat for the people in attendant.

The installation rites of the seventh Daudu Agaka, Ilorin commenced around twenty five minutes past five yesterday’s evening in conformity with the established traditions and in recognition of his kingship to the Ilorin monarchy.

A lot of pushing and shoving coupled with heavy drumming heralded the about-to-be-crowned Daudu entry into the coronation arena. Indeed, the scene was a reminiscence of Ilorin culture of communal co-habitation.

Eminent personalities in and around Ilorin converged on the Agaka’s to savour one of the most exhilarating events of the brand new year 2020.

Being a descendant of Shitta Alimi, one of the late Emir of Ilorin, it is an established tradition that the Daudu Agaka is turbaned in his ancestral home after which he would proceed to the palace of the Emir of Ilorin for obeisance and royal blessing.

Appearing in an immaculately white babaringa with flowing gown (Alkinba) to match,  Omotosho Kawu Agaka was turbaned in the presence of other Daudus, royal chiefs and a high-powered delegation from theE mir of Ilorin, Alhaji Ibrahim Sulu-Gambari.

Some relatives, family members, friends and colleagues of the newly turbaned Daudu also appeared in white costumes of lace materials ostensibly in keeping with the culture of African spirit of communality.

The new Daudu of Agaka, born on July 19th, 1961 was appointed to the respected stool of illustrious forebearers on July 6th, 2019 by the Emir of Ilorin and Chairman of the Kwara State Council of Emirs and Obas, Alhaji Ibrahim Sulu-Gambari in recognition of his worthwhile leadership qualities.

He succeeded his late father who was the immediate and sixth Daudu of Agaka, Ilorin and first Dan Iya of Ilorin, Late Alhaji Ibrahim Kawu Agaka who died last year.

Shortly after the turbaning, Daudu Agaka exchanged pleasantries and banters with other Daudus and members of the royal family from the Ilorin Emirate.

Describing his appointment as divine will, the new Daudu expressed gratitude to the Emir of Ilorin for finding him worthy of the exalted royal position.

In a brief remark, the new Daudu Agaka, thanked the Emir of Ilorin, for giving him the opportunity to serve his people.

Alhaji Kawu Agaka who expressed delight on his emergence as the 7th Daudu Agaka also promised to serve the community and Ilorin Emirate with sincerity of purpose.

Earlier in his lecture, an Ilorin based Islamic Scholar, Mallam Lukman Muktar Isalekoto, urged holders of public offices to be conscious of Almighty Allah in their daily undertakings.

The cleric said the unbearable situations in the society were getting precarious because of lack of fear of Allah, saying that any nation that prioritizes God fearing would certainly be on the righteous path.

Isalekoto expressed concern over the plight of the less privileged and noted that it was the responsibility of those blessed with resources to restore smiles on their faces.

Admonishing members of the royal family to be disciplined and lead byexample, the Islamic scholar challenged them not to allow themselves to be influenced badly through peer groups.

He also cautioned against needless division in the royal family,
saying that those born of royal blood must see themselves as an
indivisible entity and shun desperation.

Isalekoto, who identified the new Daudu Agaka as a man of humility and discipline, prayed for his successful reign in office.

Ustaz Isalekoto urged the princes to strive to take care of the
children slaves and always assist the orphans around them.

He urged both young and old to dedicate their lives to the worship of Allah.

He charged the new Daudu to make principles of contentment, protection of integrity and sincerity a watchword in his service to humanity.

Ustaz Isale-Koto who explained that the trio principle are sure way of greater success in life also prayed God to guild the new Daudu Agaka in the management of his people.

Bolakale Kawu, an engineer described the new Daudu Agaka as a complete gentleman who had been contributing positively towards the development of Agaka community and Ilorin Emirate as a whole.

While appreciating the Emir of Ilorin, for chosen Alhaji Omotosho Kawu Agaka as the new Daudu Agaka, Engineer Bolakale Kawu expressed optimism that the reign of the newly turbaned Daudu Agaka would witness series of developmental activities in the entire Emirate.

Dignitaries urged the new Daudu of Agaka, Ilorin to use the position to reunite the family, ensure the growth and development of his people and domains, be focused and dedicated to the general well-being of his people.