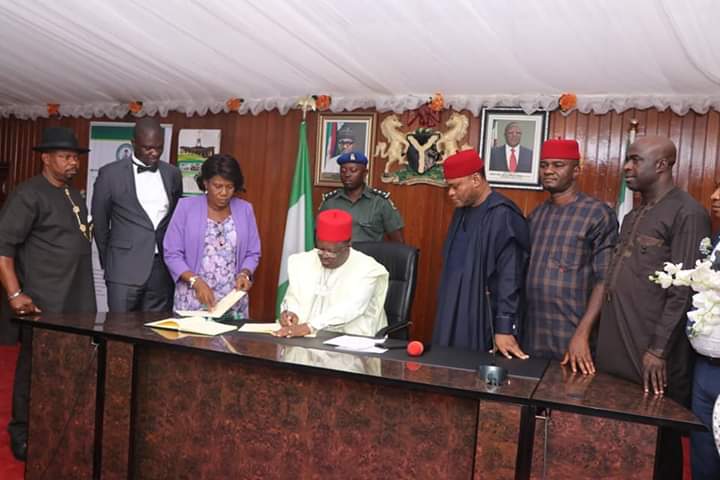 Ebonyi State governor,Engineer David Umahi has vowed to create more opportunities and make more Ebonyians millionaires as he signed into law the 2020 budget of N178,136,634,975.

38 an and promised to raise the internally generated revenue of the state.

Performing the function at the Executive Council chambers, government House,  Abakaliki,  on Friday, the Governor explained that the main focus of the budget was on  Infrastructure, Education and Economic empowerment.

He called on all and sundry in the state to join hands to make the budget achieve the highest level of performance,  adding that the 2019 budget recorded great success.

Umahi  emphasized that the completion of all on-going projects, including the dualization of Abakaliki-Enugu and Abakaliki -Afikpo highways were tasks that must be accomplished.

He maintained his resolve to build a world-class Stadium, College of Medicine, the Ebonyi International airport as well as empower more citizens in 2020 fiscal year, adding that his desire was to make more millionaires in the state.

While decrying the fluctuating federal revenue accruable to the state in relation to its developmental needs, he expressed dissatisfaction with the state’s internally generated revenue statistics.

Umahi declared that January 2020 would witness aggressive IGR drive across the State which would spare no sacred cows.

According to him, while other States recorded between 2 to N3b in IGR in the last month, Ebonyi only struggled to scoop about N300m, a development he said was an indication that all that were collected did not enter into government coffers.

Governor Umahi further stressed that his ambition was to bequeath an economically viable state to the next administration while consolidating all his capital projects.

He estimated that rent from the Shopping Mall, 60 per cent of it, down stairs had already been taken, was capable of adding N300m into the state coffers every year while  sale of shops at the Margaret Umahi International Market has added to the state over N10 billion.

Umahi further explained: “Last month, what was posted to us as IGR was only N300m, and that is very devastating.

“I have asked the SSG to issue querry to  the Internal Revenue Board.

“I have declared January a battle ground for internally generated revenue in this state.

“We will do nothing else than to chase all our revenue from the day we came into office to this day.

“There are lots of short changing against us that even some civil servants also engage in such shoddy acts.

“And we must pay minimum wage, we can’t be an exception.

“I have to told the Speaker that they have to be available.

“We will throw all rules to the wind to go and look for this money.

“So,  there are going to be committees on Solid Mineral; on integrated IGR and in fact, every kind of committee…

“For the next 18 months, we will chew projects in this state, after which I leave and allow you share the money as you like.”

Governor Umahi also adopted the event to announce another shift in date for the movement of Abakpa main market traders to  the International market from the previous January 10 to February 10, 2020.

Umahi explained that his decision was guided by conscience going by the discovery that electricity , toilet and water facilities had not been properly fixed in the two lots earlier assigned to the trader.

He maintained that any government that was worth its name should be able to listen to genuine concerns of its subjects, adding that a task force would be set to immediately fix the facilities before the irrevocable date of movement.

To fix the facilities, according to the governor would cost the state about N3billion.

Speaker Francis Nwifuru, while presenting the appropriation document to the governor for assent described the him as a leader with divine grace.

He expressed optimism and confidence that the 2020 budget would further consolidate the superlative all-round development sweeping through the State, courtesy of the Governor.

The Attorney-General and Commissioner for Justice, Cletus Ofoke in an opening remark, said the Governor’s duty was in tandem with section 121 of the Constitution of the federal republic of Nigeria, 1999.

The ceremony was attended by the House of Assembly members, State Executive Council members, technocrats and other stakeholders.