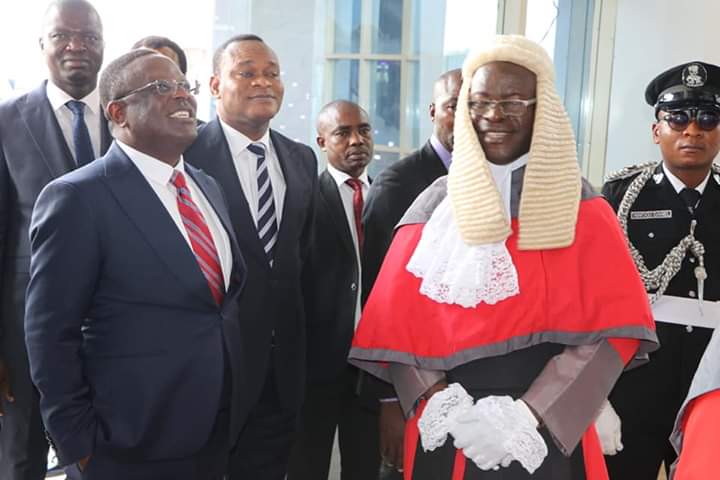 The disclosure was made by the State Chief Judge, Hon Justice  Anselm Nwaigwe during a court session marking the end of 2018/2019 Legal year and the commencement of 2019/2020.

According to Nwaigwe, the cases comprised all filed in the said year and others brought forward from the previous year, spreading through the High Courts, Magistrate Courts, Customary Courts and Customary Courts of Appeal.

Giving the breakdown, Nwaigwe explained that the High Court received 19,450 filed cases and 15,158 brought forward cases, out of which 15,310 was disposed with 19,298 still pending.

While 172 cases were filed and 344 were brought forward in the Customary Courts of Appeal, 213 were disposed and 303 pending.

The Chief Judge also noted that though revenue generation was not the main stay of judicial services, the arm earned a total revenue of N31, 146, 671.59, emanating from marriage fees and others, to the government in the year under review.

Nwaigwe decried the hitherto insufficient personnel to man the various case files in Justice Ministry describing it as a challenge to quick dispensation of justice in the a State.

He however expressed appreciation to the Governor for giving his approval for employment of more legal officers to ameliorate the challenge.

Decrying the level of congestion in the Correctional Services across the Country, the legal icon commended the Governor for domesticating criminal Justice administration in the State, expressing optimism that it would help decongest the prisons.

While he solicited for the Governor’s assistance in the areas of more office accommodation, residential quarters, functional vehicles for Judges and other legal personnel; promotion and other welfare packages for the Judicial Staff, Nwaigwe expressed his commitment to continue to enhance the performance of the Courts through digitization of its services.

Nwaigwe added: “We intend to commence reporting of the judgements of our Courts in Ebonyi State.

“In the coming weeks, shall be inaugurating a Law Reporting Committee and the Committee shall be adequately equipped to commence work in concrete terms.’

Governor David Umahi, in his remarks, extolled the Chief Judge and the Judiciary in the State for their commitment to the cause of prompt justice delivery

He revealed that his administration would, by February 2020, float free comprehensive medical care for all Judges in the State and their spouses.

Assuring them that his administration would roll out plans to giving the Judiciary the best infrastructural facilities in the country from January, 2020, the Governor emphasized that the State’s 2020 budget would be the best for them as it had already captured all their requests

The Court Session was preceded by an Interdenominational Church Service held at the State Ecumenical Centre presided by the State Chairman of the Christian Association of Nigeria, Rev.Father Abraham Nwali.