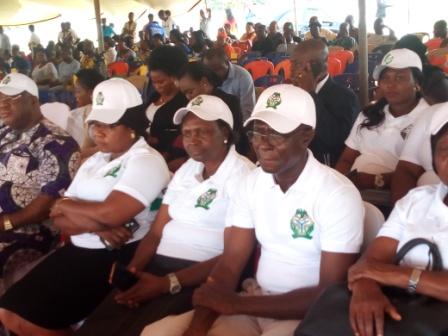 Ebonyi State government has approved a total sum of N64 million to rural farmers across the State to assist them open and own Bank Accounts.

Governor David Umahi gave the approval on Monday at Onueke, Ebonyi State, during the official flag-off of the Account Opening Week of the Central Bank of Nigeria.

He said the amount would be given to the rural farmers through the 64 Development Centre (DC) Coordinators at the rate of N1million per DC, targeting 1,000 farmers from each.

Umahi who stated that the State targets about 8,000 new accounts within the month of December, said the move was to guarantee the achievement of the target as well as encourage the farmers to effectively access economic interventions of government and the CBN.

He, however, decried the low status of the state in CBN’s Financial Access and Accounts Opening rating and blamed the development on failure of commercial banks to extend their services to the hinterlands.

He implored the apex bank to prevail on commercial banks in the state to reach the rural communities, stressing that the state government would evolve plans to ensuring that any commercial bank wishing to continue operation in the State must have at least, a branch in one of the local government areas of the State in order to qualify.

The governor who reiterated that the key priority of his administration was how to lift the economic standards of the people, commended the CBN and its Governor, Godwin Emefiele for all interventions so far granted the state in agriculture and other economic ventures.

He further lent support to President Muhammadu Buhari for closing the country’s borders, lamenting that the state has had its share of poisons snuggled into it in the name of foreign rice.

He urged the CBN to evolve policies to further encourage local production, adding that Nigeria nation should not be a dumping ground.

Meanwhile, the governor lamented that commercial banks operating in the state owe the state government internally generated revenue debt of over N6 billion, and called on the CBN to prevail on them to defray the debts.

Umahi’s explained: “Each coordinator is going to have about 1,000 of the farmers, those who have not opened account from the rural areas.

“We are going to offer them N1,000 each to open bank account, starting from tomorrow.

“You don’t know what the One thousand mean to a mother in the village.

“We will definitely have more than 80,000 new accounts within the month of December.

“That is the target.

“We will work to ensure that before any bank qualifies to operate in the state, it must have a branch in at least one local government area of the state.

“Banks in the state owe us over N6 billion IGR debt.

“I am directing the deputy governor to make a letter to the CBN as their headmaster, to make them pay us the debts.”

CBN Governor, Godwin Emefiele, in his address explained that the Account Opening Week was an initiative of the Bankers Committee, Financial Services Providers and all Financial Inclusion Stakeholders in the State.

Represented by the State Branch Controller, Chris Adayi, Emefiele, said the exercise was ongoing simultaneously across the six geopolitical zones of the country with Ebonyi as the choice state for the South-East.

He explained further: “The idea behind the AOW is to drive activities towards achieving the set target of financial inclusion for 2019.

“The AOW is part of set of initiatives aimed at driving collective action and achieving the intended target outlined above.”

Head of the Financial Unit of the CBN, Daniel Ogbogu lamented that in 2017 alone, less than 10,000 farmers qualified for the CBN Agricultural Fund programme as against the profiled 25,000, owing to lack of bank accounts.

He encouraged people to open accounts in order to fit into the current global financial transactions digitization.