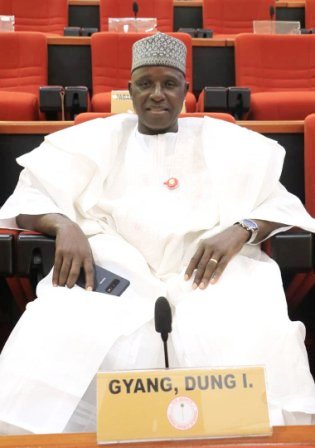 The Senator representing Plateau North Senatorial District, Senator Istifanus Gyang has said he will not be a party to introducing a regime of tyranny against the masses in the country.

The senator was responding to calls by the Nigeria citizens who are expressing their displeasures over the ‘Hate Speech’ and ‘Protection from Internet Falsehood and Manipulation’ Bills currently undergoing passage into law by the Senators of the Federal Republic of Nigeria.

In a statement by his Senior Media aide, Hon Musa Ashoms, the Senator said to deprive citizens of the right to freedom of speech and expression is tantamount to endorsing and introducing a regime of tyranny.

He said this becomes even more draconian when death sentence has been prescribed as penalty in the Hate Speech Bill.

He said the views expressed by many Nigerian citizens and even foreign nationals who have reached him all voiced out against the passage of the two Bills.

The views expressed by the citizens according to the statement align with his thoughts and position as the Senator representing Plateau North, moreso that there are extant laws in our jurisprudence that address the concerns raised by the two Bills.

“Having sworn to an oath to defend the Constitution of the Federal Republic of Nigeria 1999 (as amended), I, Senator I.D. Gyang will not be a party to, nor grant consent to any proposed legislation that will compromise nor subvert the fundamental rights of citizens and in particular, the right to freedom of speech and expression guaranteed by the same Constitution.

To deprive citizens of the right to freedom of speech and expression is tantamount to endorsing and introducing a regime of tyranny. This becomes even more draconian when death sentence has been prescribed as penalty in the Hate Speech Bill” the statement read.

In furtherance of citizens participation in the making of any legislation, Barr Gyang has, with effect from Monday, November 25 2019, open a register at his constituency office, The Peoples Parliament’ No.1 Ibrahim Alfa Road, Giring Abattoir, Jos, for citizens to sign and make their position known on the two Bills.

The distinguished senator shall table all the views so canvassed on the two Bills before the Senate as the voice and wish of the Plateau North Senatorial District.