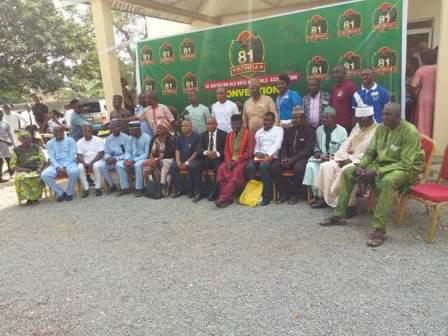 In their efforts to bring sanity,unity and to assist the downtrodden among themselves, the chairman board of trustees of the 81 Battalion Old Boys and Girls Association of Nigeria (BOBGA), Lt.

Col. John Aboh, retired, has called on the  Nigeria  Army Officers Wives (NAOWA) to extend their good hands of fellowship to the children of the country’s falling heroes or retired soldiers in order to encourage them to face the challenges of life.

Col. Aboh who made the observation in an exclusive interview with our correspondent during the association’s third convention held in keffi Hotel, Nasarawa State at the weekend, said the negatives perspective of people towards barracks boys and girls need to be addressed describing them as the most discipline children ready to contribute their quota towards the development  of the country.

“The Army Day Secondary School 18 Battalion Guard Barracks formally  in Keffi was established by me and one Col. Zupai of blessed memory in 1993.

He opened that the association will expand to include barrack boys and girls of all army barracks in Nigeria. He also congratulated the association for being registered with the Corporate Affairs Commission (CAC)

On his part, the president of the association Sc. Al. Aliyu (Lulu KK) said the aims and objectives of the association include: to advance and encourage the welfare, education and social reinforcement of its members, to liaise with other organizations, 81 Aborigines, government and non-government organizations to advice the cause of 81BN Barracks Boys and Girls Association both at home and in the diaspora among others.

According to him, the association has purchased a land worth N3.5 million to establish gainful projects for the unemployed and also spent some meaningful sum of money for charity.

Highlights of the occasion included presentations of lectures, honoraria and unveiling of the association’s logo, T-shirt and 81 BOBGA CAC.