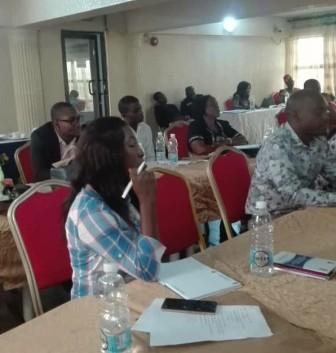 Women in border communities have been challenged to employ their strategic roles and tactics as home managers to stem the proliferation of small arms and light weapons in the country.

The United Nations Development Programme, UNDP, in collaboration with the Presidential Committee on Small Arms and Light Weapons, made the challenge on Tuesday in Uyo, Akwa Ibom State, during a two-day zonal training workshop for women organizations, civil society organizations/community based organizations in border communities on their critical role in civilian disarmament and prevention of arms trafficking.

Speaking at the event, the regional coordinator  UNDP, Nigeria, on Small Arms Programmes, Mr. Fredrick Ampiah urged women groups to form coalition for combating the crime, adding that women being  home managers, are very important in achieving success in the project.

According to him, the pilot programme, which started earlier this year, and targeted for one year for selected states close to borders in each zone as its focus.

“You can agree with me that women empowerment is a key to every nation’s development.

“And at the heart of every conflict, women and children bear the suffering.

“So to address the issue of small arms effectively, we need to work with women and children.

“Women in all societies are the bedrock of peace, and at such,  any meaningful approach to solving problems of small arms without any concerted effort aimed at bringing women into the fore will not have the desired effect.

“We want women to know that they are not only victims of small arms but a key contributor to fighting it.

“We want women to know that at the heart of the community, they know where these are coming from; they know who is keeping arms and how much the impact is on them.

“So as they go back, let them impact on other women, form coalition of women that are going to champion war against small arms proliferation.”

Corroborating the submission, the Program Coordinator for  Presidential Committee on Small Arms and light Weapons (PRESCOM), Dickson Orji, emphasized that engaging women in the fight would drastically reduce arms trafficking in the country.

He explained that PRESCOM, created in 2013, came up with the idea of seeking how women could be integrated into solving security problems facing the country with the view of harnessing their potentials towards small arms control.

Orji further urged security agencies to open ways for ideas and collaboration from civil society organizations and non-governmental organizations on arms trafficking in their area.

Orji emphasized: “Women are part of the society and can’t continue to be relegated to the background.

“When you are in the home, the woman coordinates the home and knows the children more than the men.

“Women pay more attention to the children more than the men, so they know when their children are going astray and when a child is doing something wrong.

“What the men do is to compliment the efforts of the women.

“Both armed robbers and bandits come from a home so if proper attention is paid to younger men and women, it will go a long way to reduce the menace.”

In her remarks, the President, West African Action Aid Network, Mrs Josephine Abbah, challenged mothers to always visualise the direct personal dangers associated with arms proliferations on their children and be spurred to adopt proactive interventions.

She said: “As mothers, we should first see a gun on the head of our children.

“We should first see it that a gun is on a child’s head and a trigger is about to be pulled.

“I would want them to create that type of picture.

“So whether you have seen a gun or not, I want the picture painted so that we engage at the community level.

“And they should be able to be sincere, not thinking that we have come to take their job, because I know some of them are doing what they are doing because they don’t have option for livelihood.”

Abbah further advised mothers to keep watch over their border communities and reduce the inflow of arms and weapon trafficking in their areas, expressing hope that partners would always come to their aide.