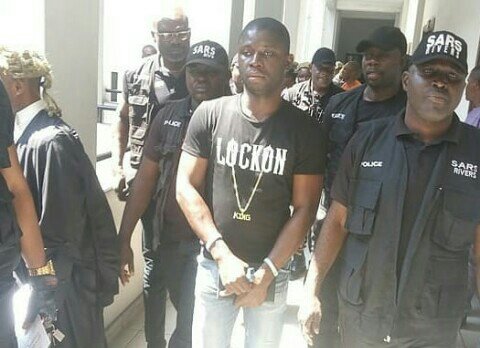 On Monday, October 21, Gracious David West, the alleged serial killer was brought before a Rivers State high court sitting in Port Harcourt, the state capital. However his trial could not go on due to absence of his lawyer.

The presiding judge, Justice Adolphus Enebeli adjourned the case to Tuesday, October 22 saying the accused person is entitled to a lawyer who will defend him in the case.

Gracious David West who has been in the custody of the Special Anti-Robbery Squad, SARS, was returned to the custody pending the Tuesday trial when the SARS officials are expected to produce him in court again.

The accused person was brought in court holding a book that looks like a bible, dressed in a black T-shirt within the inscription LOCKON amidst tight security.

Recall that the suspected serial killer was arrested on September 19, 2019 in Bori, Khana local government area of Rivers State as he was attempting to flee the state into Uyo, Akwa-Ibom State.

He had earlier been said to have made some confessional statement on how he was killing young ladies and dispossessing them of their belongings in Lagos, Owerri, Port Harcourt.