48 hours after, another petrol tanker explodes in Onitsha 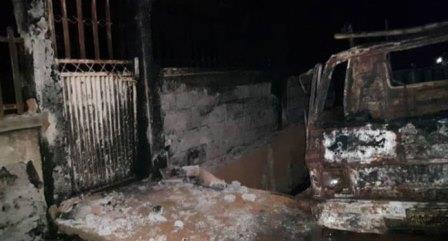 A fuel-laden tanker has exploded at Upper Iweka near Omagba, along the Enugu/Onitsha Expressway, and as the other incidence, the tanker spilled its content, which flowed through an underground tunnel into Heritage Street before it exploded.

Eyewitnesses said the incidence took place around 3:00am and destroyed buildings, shops and vehicles numbering about 15.

Before the intervention of emergency service operatives from Anambra State Fire Service, residents trooped out en-masse and lent support to quench the fire, and no death was recorded.

As at the time of this report, no life was lost in the fire accident and rescue efforts are still ongoing.

Also, death tow in the previous explosion at the same Upper Iweka has risen to seven instead two; mother and her child as earlier reported.

Meanwhile, another petrol tanker has also lost control and fallen along Agulu road this morning creating panic among residents in the area.