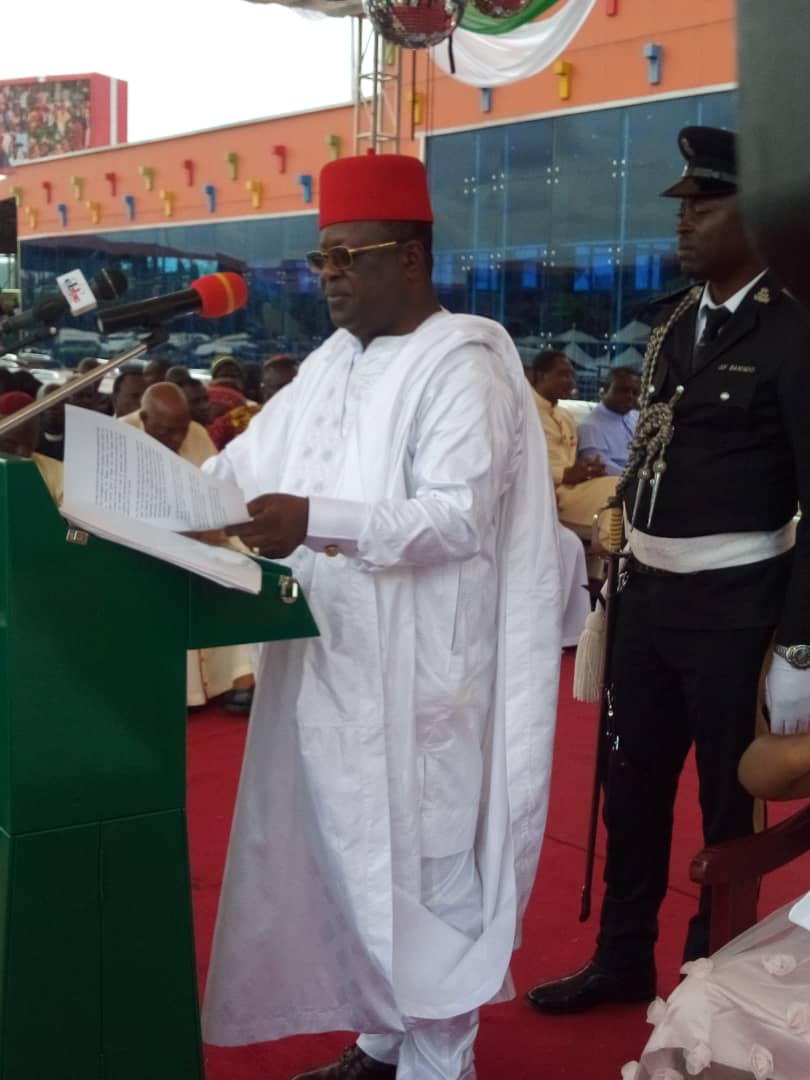 David Umahi has bemoaned the ill-treatment and humiliation often meted to Nigerians in most foreign countries of the world.

The concern forms part of the governor’s message during the celebration of Nigeria’s 59th independence anniversary and 23 years of Ebonyi State creation held at the Ngele Oruta Township Stadium, Abakaliki on Tuesday, October 1.

Umahi who hinged his grief on the recent xenophobia attacks in South Africa and other humiliating experiences of Nigerians in the United States of America, among others, called for cultural revival and value reorientation as a panacea to Nigeria’s battered image abroad.

According to him, he would soon be travelling with President Buhari to South Africa for talks with South African government on the Affairs of Nigerians in that country.

He maintained that open castigation of the country’s leaders by citizens would continue to worsen the already battered image of the country in the eyes of the international community, stressing that every Nigerian needs empirical self-evaluation, which would lead to  corporate image restoration.

The governor who reaffirmed his undaunting said, “belief in one Nigeria build on godliness;  equity, justice, rule of law and love for one another, commended President Muhammadu Buhari in his fight against corruption; commencement of work on the second Niger Bridge as well as his commitment to food sufficiency through robust agricultural programmes.

He further assured Ebonyi people and indeed the South-East that the recent closure of the Akanu Ibiam International Airport Enugu was for the good of the people, adding that he had been in constant talks with the President on both modalities, the fund and speed of execution of the ongoing comprehensive overhaul of the Airport.

Umahi added, “Let me assure Ebonyi people and the entire southeast that the closure of the Akanu Ibiam  International Airport Enugu was for the safety of our people.

“As the chairman of Southeast governors’ forum, I had a meeting with Mr. President and we have agreed on modalities for quick execution, and of course, comprehensive overhauling of that airport.

“We are seeking for a special funding with Mr. President and as I travelled with him, I will also review with him how far we have gone in the release of the funds for the quick completion of that project.

“We have provided two coaster buses for free transportation; 10 Hilux brand of Pick-up vans and a brand new liaison office in Owerri.

“Castigating leaders openly will not add any value to what we seek rather, our eyes should be on the ball.

“We must as Nigerians do everything to enhance our cultural value and better ourselves outside the country.

“The way we are treated outside the shores of this land is not encouraging.

“We must have to do empirical evaluation of ourselves because we get devalued a lot in other nations.

“Chasing money by all means, we indulge in all kinds of manners that devalue the laws of other nations, and we are caught.

“I get a lot of calls from our people  in Ghana saying a lot of them are about to be sentenced. “Some of our people have been sentenced for  1000 years and some 500 years  in prison.

“And so it is important that as Nigerians we re-evaluate our status and our values because of the way we are treated, even as a governor.

“You don’t wear governor at the airport.

“When I was in America, they singled some of us out and conducted a thorough search on us.

“It is an intimidation, and we will not continue to live in such a manner that would continue to bring humiliation to our nation: it is very important.”

Governor Umahi who seized the event to chronicle his achievement in all sectors of development further assured the people that no project, both ongoing and newly initiated across the State would be abandoned irrespective of its size or cost.

He appreciated God for the living founding fathers of the State and paid posthumous, glowing tribute to those who had been demised, beckoning on all and sundries to join hands to continue to sustain the ongoing developmental revolution sweeping through the State.