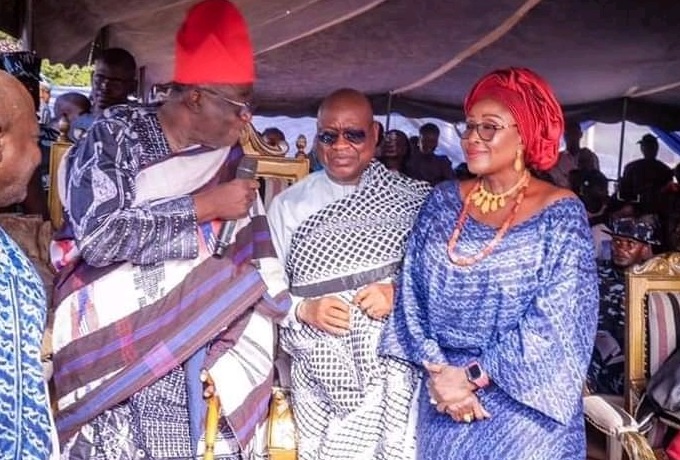 As Director-General of the Industrial Training Fund (ITF), Sir Joseph Ari has made his mark as an outstanding public officeholder. Most remarkable of his achievements is the unveiling of the ITF Reviewed Vision: Strategies for Mandate Actualisation

The Director General and Chief Executive of the Industrial Training Fund, ITF, Miskoom Joseph Ari, was on Saturday, December 31, 2022 honoured with a chieftaincy title of the Kurnajam (Minister of Defence) of Gamai land by Long Gamai of Gamai Nation, HRH Miskoom Martin Muduutrie Shaldas III.

At the prestigious Gamai cultural festival, Bit Gamai 2022, the Long Gamai acknowledged the existence of similar title on the recipient from Kwo Chiefdom, but said Ari deserves more, given his services and contributions to his people and Nigeria in general.

In a similar vein, the ITF boss was confirmed with the LEADERSHIP Public Service Person of the Year 2022 as well as a Fellowship Award by a United Kingdom-based Occupational Safety and Health Association (OSH Association UK) for his outstanding qualities in uplifting the Fund to enviable height.

A citation read in honour of Ari said: “For his home-grown initiatives that expanded existing skills acquisition programmes leading to the training and empowerment, in four years, of over 500,000 Nigerians who are today earning sustainable livelihood as paid employers and entrepreneurs, Sir Joseph Ari is the LEADERSHIP Public Servant of the Year 2022.

“As Director-General of the Industrial Training Fund (ITF), Sir Joseph Ari has made his mark as an outstanding public officeholder. Most remarkable of his achievements is the unveiling of the ITF Reviewed Vision: Strategies for Mandate Actualisation. The plan, which was initially slated to terminate in 2022, was, however, reviewed in 2020 to address gaps identified in the course of its implementation, and to appropriately respond to the negative impact of the COVID-19 pandemic on numerous clients.

“The plan enabled the ITF to aggressively address service challenges by computerising its operations and tackling infrastructural challenges to expand access to Nigerians desirous of acquiring skills, and generally address a gamut of other structures that were impinging on its ability to effectively discharge its mandate for national economic growth and development and to meet the skills requirement of the nation in line with global best practices”.

Ari was appointed Director- General/chief executive of the Industrial Training Fund in 2016 by President Muhammadu Buhari, with the mandate to develop a vast pool of skilled manpower sufficient to meet the needs of the public and private sectors of the national economy.

Ari said he believes that until most Nigerians are equipped with competitive technical skills, Nigeria as a nation will continue to fight a losing battle against the blights of poverty and unemployment and their attendant consequences. This belief was inspired by success stories from countries like Japan, Germany, Vietnam, Singapore and Brazil which transformed into industrial power-houses using technical and vocational skills acquisition.

In a related development, Sir Joseph Ntung Ari was voted ‘Plateau Man of the Year 2022’ by Plateau people both within and outside the State.

He emerged first place following his online nomination and voting by members of the general public as monitored and confirmed by the Plateau Man of the Year Awards panel of jury which lasted from the 21st to 31st of December, 2022.

Consequently, this prestigious Award will be presented by the COA Media Group, organizers of the Plateau Man of the Year Awards at a ceremony slated for February 5, 2023 at the Tamarald Event Center, Jos Plateau State.