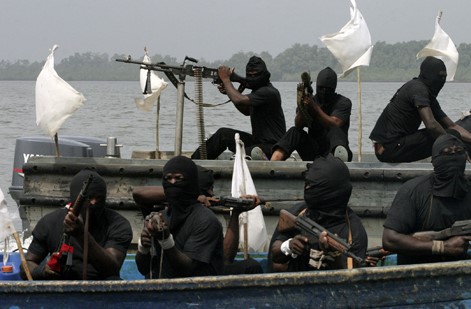 The News Agency of Nigeria (NAN) learnt that the pirates ambushed their unsuspecting victims in Okoroma and Ogbokiri-Akassa communities of Nembe and Brass Local Government areas of Bayelsa.

Sources close to the affected oilfields said the gunmen reportedly shot dead two staff of the Nigerian Agip Oil Company and a personnel of the Nigerian Security and Civil Defence Corps (NSCDC).

The driver of their boat, an indigene of Okoroma community, is still missing, according to the local sources who witnessed the incident and narrated same to a NAN Correspondent.

According to the sources, in the ambush that occurred at Ogbokiri-Akassa in Brass Local Government area, six oil workers allegedly doing maintenance job close to their platform were kidnapped and whisked away.

It was further gathered that the Agip oil workers and their security personnel came under attack at about 6am while working close to a manifold in the deep swamp.

Solomon said one personnel of the command died in the ambush, while two others who were missing have been found and are currently receiving treatment at a medical facility in Yenagoa.

“Yes, our officers were ambushed and attacked by some unknown pirates while on their lawful duty of providing protection to some Agip oil workers close to Obama manifold in Okoroma community of Nembe Local Government.

“One personnel was killed while the other two that were missing have been found and are responding to treatment,” he said.

Mr Tarinyu Joseph, the Youth President of the Okoroma Clan, said indigenes of the area recovered the corpses of those killed.

He added that those injured were taken to the hospital while the boat driver, identified as his brother, is still missing. (NAN)