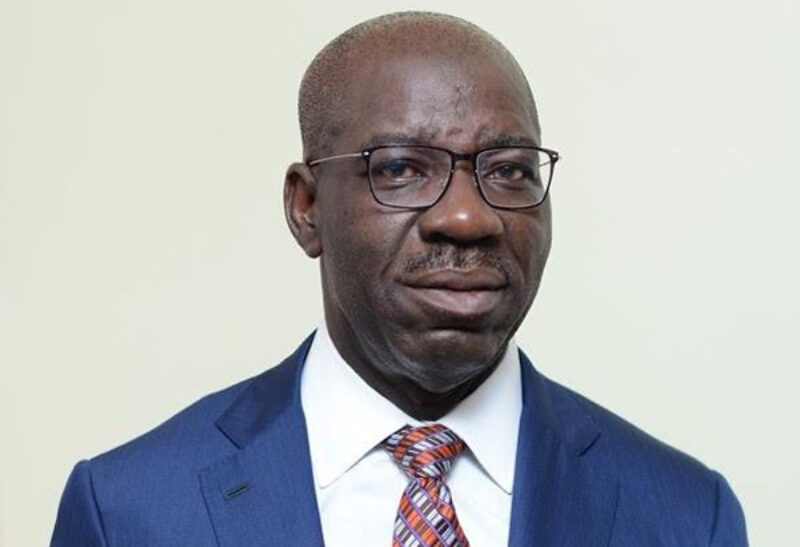 The coalition of Civil Society Groups has faulted Governor Godwin Obaseki of Edo State over his allegation that the Central Bank of Nigeria (CBN) printed the sum of N60 billion to pay the March, 2021 statutory allocation to states.

The groups made this known during a world press conference they addressed on what they tagged ‘controversy and falsehoods surrounding the N60 billion’, held at NUJ Secretariat, Abuja on 21st April, 2021

According to a speech signed by the President, Bassey Etuk Williams (JP), and the Secretary, Abubakar Ibrahim, they said the essence of the conference was to set the record straight and affirm that the CBN never printed the alleged sum of money.

“The essence of this press conference is to correct the falsehood been peddled by some individuals and some political parties regarding the printing of N60 billion.

“This issue prompted the emergency meeting of the zonal and national executives of the Coalition of Civil Society Group. The group x-rayed the issue, and in a bid to prevent misinterpretation and rekindle the confidence and trust reposed on the CBN and the Governor in particular, we decided to put the record straight.

“It is with great pleasure that we welcome you to this Press Conference been addressed by the leadership of Coalition of Civil Society Groups, on the ranging controversies thrown up by a siting Governor from Edo State, someone who we believe should have a better understanding on workings of the economy and governance.

“We have watched with keen interest overtime, and we won’t be doing justice to the entire nation if we don’t make effort to disabuse the minds of our citizens on the falsehood been peddled around by some individuals for political gains and to distract the government. It is unfortunate and we condemn the political dimension the issue has taking.

“The issues raised by Gov. Obaseki and others; alleging that N60 Billion was printed by CBN and the Federal Government to augment for the March, 2021 FAAC allocation, is orchestrated by enemies of Government just to whittle down the confidence Nigerians have in the government and her effort to invigorate the economy”.

“After our due consultations and enquiries, our Group discovered that the allegation was just falsehood capable of distorting progress recorded and as campaign to smear the effort of a performing Governor of the CBN. Reports made available to us reveals that going by the money FAAC share, the funds are monies generated and domiciled in the federation account, and is usually shared to the states every month.

“There was no evidence that the March allocation was borrowed which contradicts the claims of those saying March allocation money was printed. We further discovered that all the states owe the CBN. These monies are bailout funds given to them to cushion the effects of the difficulties experienced by the governors in their bid to deliver on good governance.

“We don’t need such distractions at this time when the country is facing much insecurity and hunger in the country. We need patriotic interventions and we equally expect progressive contributions towards developing and governing the Nigerian polity.

“We condemn the falsehood and the controversy been generated; this is not what we need at a time like now.

“We salute the courage of the CBN Governor for rising to the occasion and quickly correcting the wrong notion been expressed by nay sayers.

“We hope that this matter has been put to rest by that singular sincere and patriotic disposition and effort of the CBN Governor and we implore the state governors to pay back.

“We have followed the activities of the Governor CBN especially during the covid-19 pandemic; we applaud his effort, policies and programmes embarked upon to cushion the effect of the pandemic.

“Governor Emefiele has also backed up his pledge to facilitate job creation with the creation of the Creative Industry Financing Initiative (CIFI), which is being implemented in collaboration with the Bankers’ Committee.

“Without equivocation, Emefiele’s contribution to the development and growth of the Nigerian economy, as well as innovations in development financing is worth celebrating.

“He has encouraged the diversification of the economy and stimulate growth in the agriculture sector in line with President Muhammadu Buhari’s plan, he put in place an innovative Agric credit plan: Anchor Borrowers Programme and this has increased yield per hectare.

“He stabilized the Naira and put the economy on a right footing. And his effort has pulled the country out of recession.

“CBN Governor has embarked on other policies such as the Youth Entrepreneurship Development Programme (YEDP), Accelerated Agricultural Development Scheme (AADS), the Agri-business/Small and Medium Enterprises Investment Scheme (AGSMEIS) all in an effort to build a strong economy”, they group said.