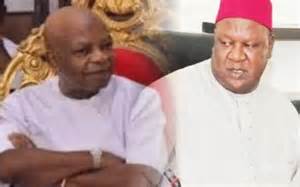 The Southeast Governors and other Igbo leaders have appealed to their sons: former Secretary to Government of the Federation (SGF), Senator Anyim Pius Anyim and a business mogul, Chief Arthur Eze to sheath their swords over their recent misunderstanding leading to mutual media attacks.

The duo have recently been engaged in trending media altercations against each other over matters of long standing conflicting interests.

Eze had on a national daily maligned the person of Anyim and his former office as the Secretary to the Government of the Federation alleging that he (Anyim) was tribalistic and of no benefit to the majority of the people.

Anyim in an open reply had accused Eze of being a greedy and ungrateful elder whose idea of a successful public office holder depends on how much he was able to gain from the person in pursuit of his selfish ends.

Anyim further advised Eze to respect his age and tow the path of honour, refrain from unguarded utterances and employ his God-given wealth for the good of the people like Alhaji Aliko Dangote or Chief Cletus Ibeto.

However, Governor David Umahi while briefing journalists on Sunday on the fallout from the expanded Southeast Governors’ Forum virtual meeting, said the forum has requested the president of Ohaneze Ndigbo, Chief Nnia Nwodo, to meet, and mediate between the two for amicable settlement.

The Southeast Governors Forum chairman,  further appealed to the media not to exaggerate the little misunderstanding between the two brothers so as not to introduce undue tension.

Umahi said: “The meeting requested the president of Ohaneze Ndigbo, Chief Nnia Nwodo to meet with Chief Arthur Eze and Senator Pius Anyim, and to mediate between the two of them.

“The forum directed that the two illustrious sons of Ndigbo should cease fire.

“And we appeal to the media not to exacerbate the little misunderstanding between the two brothers.”

The Governor informed that the forum, during the meeting passed a vote of commendation and confidence on the President-General of Ohaneze Ndigbo, Nnia Nwodo.

Umahi further raised an appeal of the governors to the youths of the zone to key into the many federal government initiatives; the World Bank and the Central Bank of Nigeria programmes, especially in agriculture to better their lots, assuring the readiness of the governors to assist anyone wishing to venture into that.

He urged the youths to utilize their times for productive ventures and desist from unbridled indulgence in social media propaganda and dissemination of fake and dangerous news.

He said: The southeast governors are appealing to our youths to try the federal government initiatives through the CBN in resuscitating the economy through Agriculture, rather than wasting their usefulness in Social media and propagation of fake and very destructive news.

“So we are asking the youths, our men and women that the governors are ready to help them participate in the robust programmes of the federal government,  the CBN, the World Bank, in resuscitating the economy, especially in areas of agriculture”.