Leaders express disappointment over state of railway in southeast 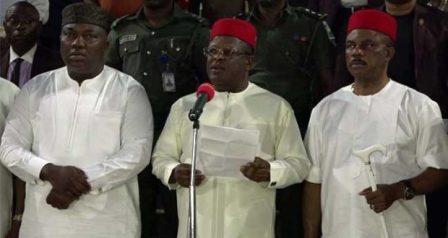 Governors and leaders of the southeast have expressed their disappointment over the persistent abandoned state of the dilapidated Eastern Corridor; the railway passing from Port Harcourt through major parts of the zone to the north-central and northeastern parts of the country.

The development was part of the outcome of the expanded Southeast Governors Forum virtual meeting held on Sunday.

Chairman of the forum and governor of Ebonyi State, Engr. David Umahi, who disclosed this to newsmen in Abakaliki, the Ebonyi State capital at the end of the meeting said the forum discovered that there was no real funding available for the project from the federal government.

The leaders therefore, agreed to collaborate with governors of south-south, north-central and northeast to dialogue with the federal government about the project which according to them was an already existing railway line.

The forum however commended President Muhammadu Buhari for continued funding and work progress on the second Niger Bridge and the Enugu International Airport.

Umahi noted that the leaders insisted that there was no way the pipeline would take off from the zone without stepping it down for the zone’s general benefit.

In its economic deliberation for the zone, the Governor informed that the forum has to set up a 54-members committee on the Alaigbo Stabilization Fund, an economic consolidation programme of the zone.

According to him, the committee was to come up with the programmes and procedures for the success of the fund and report back to the forum within the next six weeks for review and take off.

The forum also reviewed the COVID-19 situation and reached agreement that while it waits for the federal government on schools reopening, it would embark on aggressive cleaning and infrastructural upgrade of schools to meet up with the NCDC protocol.

The governors who emphasized the continued adoption of regular hand washing, social distancing and other NCDC protocols, also agreed that it would embark on compulsory testing of all teachers in the zone as well as all those from 65 years and above as a measure to nip the pandemic.