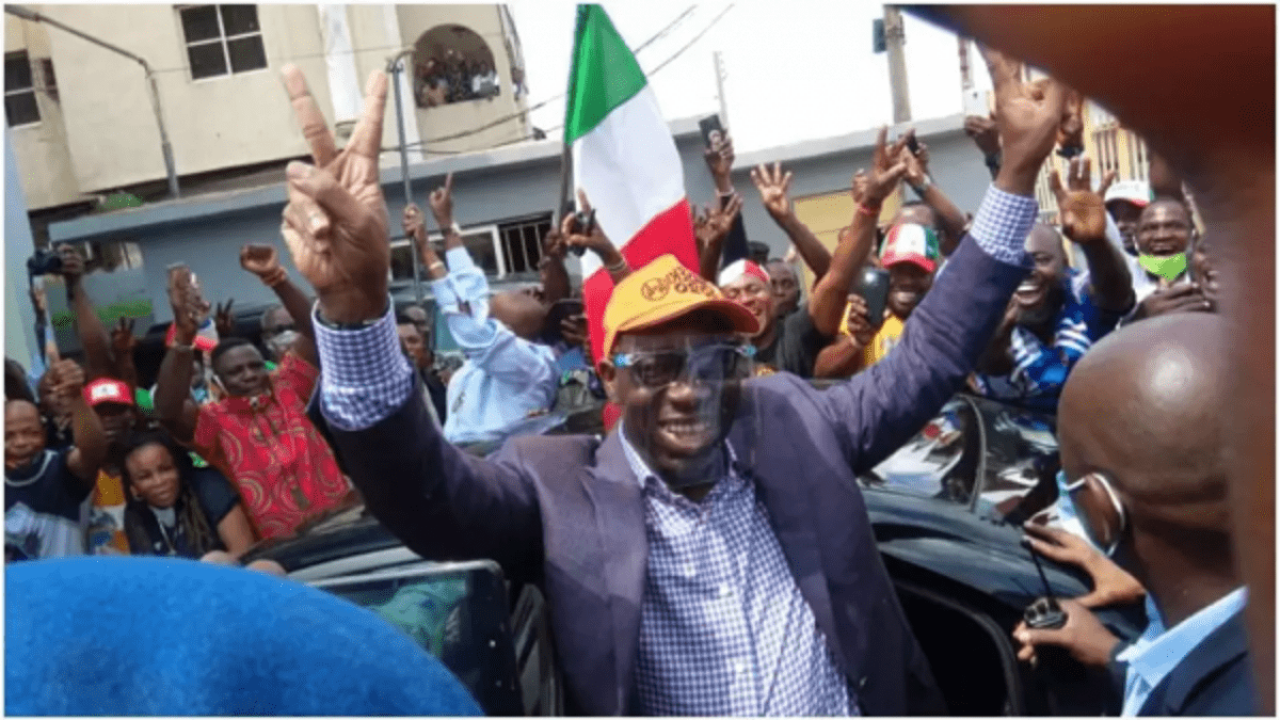 As Edo people set to choice who governs them from 2020, the fight seems to be hotter between the incumbent governor, Godwin Obaseki and his closest challenger, Pastor Osagie Ize-Iyamu. In this special report, FATIMA MOHAMMED examines the chances of the incumbent to retain his seat.

Godwin Obaseki, the candidate of the Peoples Democratic Party (PDP) and incumbent governor of Edo state is a major contender in the September 19, 2020 election, who will slug it out with his main challenger Pastor Osagie Ize-Iyamu of the All Progressives Congress (APC) and others.

In the 2016 contest, the race was majorly between Obaseki who was then flying the flag of the APC and his archrival Ize-Iyamu who was the candidate of the PDP. Both men have moved to the opposite direction with Obaseki now contesting under the PDP and Ize-Iyamu in APC on the other hand.

Obaseki having defeated Ize-Iyamu in 2016 while he (Obaseki) was in the APC through the instrumentation of the then governor of the state, Comrade Adams Aliyu Oshiomhole who worked tirelessly to ensure his emergence, but things have turned around with the same Oshiomhole now backing Ize-Iyamu instead of Obaseki due disagreements that ensued between the former governor and the incumbent. Will Oshiomhole factor also play now that he is out of power?

Now that Obaseki has moved from APC under which he emerged governor, what chances are there for him to retain his governorship position with the ticket of another political party (PDP).

Since the return of democracy in 1999, Edo has shown support for PDP, which ruled from 1999-2007 when former governor, Chief Lucky Igbinedion was in charge of the state. The PDP was in control in all elective positions in the state, but lost out in 2008 when the then governor,

Professor Oserheimen Osunbor was ousted by the court in November 2008, paving the way for Comrade Adams Oshiomhole of the defunct Action Congress of Nigeria (ACN), which later formed part of the present day All Progressives Congress.

Though Edo was under the control of the APC, the opposition PDP won the presidential elections in 2015 and 2019 respectively. And currently PDP has two out of the three senators representing the state; Clifford Ordia, (Edo Central), Mathew Orhoghide (Edo South). Francis Alimikhena alone represents the APC.

Despite the obstacles Obaseki faces, there seems to be a mass defection from APC to PDP. According to the defectors, Obaseki has done well in Education/human capital development, agriculture, roads and other infrastructures that should warrant his reelection.

In the last report on poverty and inequality in Nigeria by the National Bureau of Statistics (NBS), Edo state was ranked as the sixth state with the lowest poverty index in Nigeria with only about 12 per cent of her citizens classified as being below the poverty line.

With the assumed balanced distribution of positions within the PDP; state chairman from Edo Central, the governor and his deputy from Edo South and North respectively, the political arrangements seems to favour Obaseki.

A  PDP chieftain in Edo South Senatorial District, Owere Dickson Imasogie, expressed optimism that PDP would defeat the APC in the gubernatorial election.

There have been mass defects of about 20,000 citizens who have joined the party after Governor Obaseki moved to PDP on June 19.

The state PDP chairman, Tony Aziegbemi noted defection from other parties to PDP have been a daily occurrence in the state, adding that the party’s national headquarters handed him more than 20,000 membership cards before the primary election, which has run out.

“Every day people are defecting in the various wards across the 18 local government areas in the state to PDP,” Aziegbemi disclosed.

Both PDP and APC have continued to accuse each other of plots to manipulate the exercise in favour of their respective candidates and plans to rig the election have been continually exposed.

Though, siting Ekiti as a case scenario where former governor, Mr. Ayodele Fayose turned into a ‘weeping boy’, crying that the power at the centre was suppressing the state, it would be difficult to use ‘power of incumbency’ at the state level to predict whether Obaseki would be in charge of Edo during the election or he too suppressed like Fayose through massive deployment of security agents.

Whether Godwin Obaseki, his closet challenger, Ize-Iyamu or any other person becomes the next governor of Edo State, time will tell. But all the residents are clamouring for is peaceful, free, fair and generally acceptable election devoid of manipulations and wanton loss of lives as been witnessed in some previous elections.