The Travail of Magu: How it all began 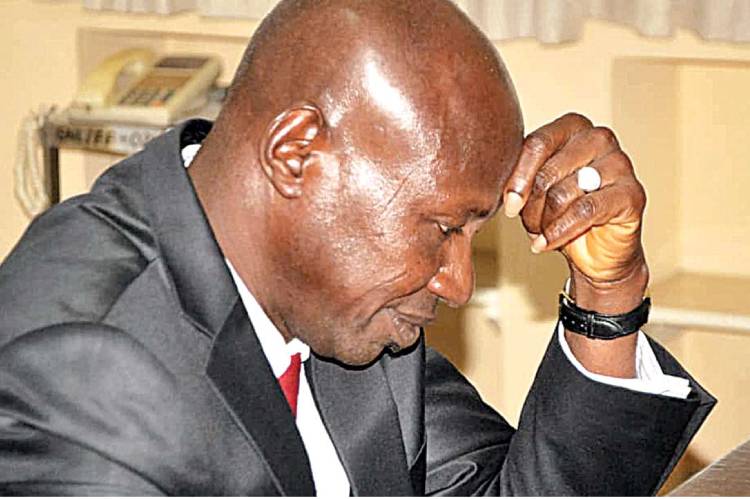 The alleged infiltration of corruption into the engine room of the anti-graft agency by one of its own – former acting chairman of Economic and Financial Crimes Commission (EFCC) can only be described as the case of ‘a dog eating a bone hung on its neck’ or a thief stealing what has been kept at his custody. The man who was entrusted with the duty of fighting financial crimes now accused of perpetrating same. What an irony! In this special report, FATIMA MOHAMMED went down memory lane on the former anti-graft boss.

Magu lost his father at a young age and was raised by his uncle, Bukar Magu, the first Accountant–General of Borno. Subsequently, Magu got his BSc in Accounting from the prestigious Ahmadu Bello University, Zaria, Kaduna State in 1986.

For his National Youth Service Corps (NYSC), he served as the NYSC Accountant at the Benue State Health Services Management Board, Makurdi. And a year later, in 1987, he was appointed as a full-time accountant by the Borno State Government. He rose to become a Zonal Accountant. Then in 1990, he gave it all up, voluntarily, resigning to join the Nigeria Police Force as an Assistant Superintendent of Police.

As a police officer, Magu worked as the Coordinator of the Nigeria Police Building Society. He started the fight against fraud and corruption when he moved on to work with the Special Fraud Unit (SFU) of the Nigeria Police Criminal Investigations Department (CID). He was the team leader of the Financial Crimes, Money Laundering and Advance Fee Fraud investigation at the Criminal Investigations Department (CID).

In 2003, Magu was promoted to the rank of Chief Superintendent of police (CSP). Upon the establishment of the Economic and Financial Crimes Commission (EFCC) in that same year, Magu was recruited and worked with the pioneer chairman of EFCC, Nuhu Ribadu and was a key person in the achievements recorded by Nuhu Ribadu.

Magu was seen by his peers as an incorruptible and courageous officer. He was made the head of the sensitive Economic Governance Unit (EGU), a unit in charge of investigations of senior public officials. He gained public attention when he led many high profile investigations against former governors; James Ibori of Delta State and Senate President Bukola Saraki of Kwara State. He also reportedly worked with pioneer chairman Nuhu Ribadu to jail his brother-in-law and former Bank of the North chief, Shettima Bulama. He was described by Police sources as “a fearless investigator who can stand up to any duty”.

He served a member of the investigative committee convened by National Security Adviser (NSA), Babagana Monguno on the orders of President Muhammadu Buhari to probe the procurement of arms in the Armed Forces from 2007 to 2020.

Magu’s first arrest was on 4 August 2008, when he was accused of illegally keeping case files of top politicians being investigated by the commission. His house in Abuja was searched and his property allegedly carted away by operatives of the EFCC. He was subsequently redeployed to the police after days of detention with nothing incriminating found against him, but was later suspended from the police and had to go without salaries for several months.

In 2011, Ibrahim Lamorde was appointed as the EFCC chairman and made the reappointment of Magu- who he had previously worked with, a top priority. But when the police boss was to confirm the deployment of the officers, Magu’s name was absent.

In 2015, President Buhari appointed Magu as the acting chairman of the EFCC. However, the 8th Senate rejected the appointment of Magu twice on the basis that he lacked the moral integrity to lead the EFCC. The official security report from the Department of State Services revealed:

“In the light of the foregoing, Magu has failed the integrity test and will eventually constitute a liability to the anti-corruption stand of the current government.”

Hence, Magu took over as acting chairman of the commission on November 11, 2015 and during the handing-over ceremony at the commission’s office in Abuja, he called on all staff of EFCC to get positioned for a greater fight against corruption in Nigeria. Ibrahim Mustafa Magu said with corruption, there would never be a meaningful development in Nigeria.

He said he has come to the commission to “ginger up the anti-corruption campaign.”

“There is the need to make sure that whatever is gotten for common use did not end up in private pockets,” Magu said. He further called all staff of the commission to personally channel their grievance to him as he will be solely responsive to the welfare of EFCC’s staff.

“I am ready and willing to work with everybody without any primordial concerns,” the new acting chairman said.

In October 2017, the House of Representatives Committee on Public Petitions issued an arrest warrant against Magu, for refusing to appear before it.

On May 29, 2018, the EFCC announced that 603 Nigerian figures had been convicted on corruption charges since Buhari and Magu assumed their offices in 2015. The EFCC also announced that for the first time in Nigeria’s history, judges and military officials were prosecuted.

In 2018, Magu was promoted by the Nigerian Police Force from Deputy Commissioner to the rank of Commissioner. At the end of the 8th Regional Conference of Anti-Corruption Agencies in Commonwealth Africa held at Transcorp Hilton, Abuja, on 19 May 2018, Magu has emerged their new chairman. His appointment was the highpoint of a five-day regional conference with the theme: “Partnering Towards Assets Recovery and Return”.

Upon the re-election of President Buhari in the 2019 general elections, he reappointed Magu as the chairman of EFCC; still under acting capacity since he did not pass the screening of the National Assembly.

On 7 July 2020, Magu was suspended as the chairman of Economic and Financial Crimes Commission (EFCC) because of corruption of a 24 count allegation leveled against him due to a letter sent to President Muhammadu Buhari by the Attorney-General of the Federation and Minister of Justice, Abubakar Malami.

On 6 July, 2020, a team of security men in Wuse intercepted Magu’s convoy as he was on his way to attend a meeting at the police headquarters. He allegedly pleaded to be given time because he needed to attend the meeting and there was a mild confrontation between both security councils ─ his and the one which intercepted his convoy. It took about 30 minutes before he followed them to what he claims to be an invitation to the villa.

However, sources revealed he was being investigated at the Banquet Hall of the presidential villa, invited by a panel investigating the activities of the EFCC. His personal belongings were moved out of his official residence in Maitama and his private house in Karu was searched. Operatives moved some of his belongings from headquarters.

Some of the allegations include: discrepancies in the reconciliation records of the EFCC and the Federal Ministry of Finance on recovered funds, insubordination to the office of the Attorney-General of the Federation, disobedience to court orders, empowering a cabal of EFCC investigators tagged ‘Magu boys.’ He is being probed for 380 houses, 7 ships of crude oil, and billions of Naira in assets.

With years of back and forth and numerous positions of power at different times, Magu’s time may have finally come to an end as it seems highly unlikely that he will come out of this unscathed. It might be the end of his journey in the anti-grafting sector as ironically, he has been allegedly nabbed for the same crime he was fighting against.