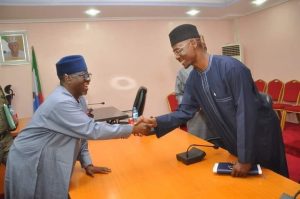 Christopher Jatau has described the leadership qualities of governor Abdullahi Sule of Nasarawa State as a replica of his predecessor, Senator Umaru Tanko Al-makura owing to the fact that the said governor has been meeting up with providing dividends of democracy to the people of the state since he came on board.

The royal father who made the assertion in his palace at Kube during a meeting which he held with the sons and daughters of the chiefdom recently, described Senator Umaru Tanko Al-makura’s good gestures to them while he was the governor of the state as marvelous. He said the present governor has also turned his searchlight towards them.

In his words” We remain grateful to His Excellency Senator Umaru Tanko Al-makura. Under his leadership as the governor of Nasarawa State, he was the first to empower us with the following, construction of Panda-Kube road, the ongoing construction of our emir’s palace, upstairs blocks of classrooms and he upgraded our traditional status from third to second class status respectively.

It will also interest you to know that the present governor of the state Engineer Abdullahi A. Sule is just a replica of his predecessor because of what we have seen on him and we believe he will soon come to our aid to complete the ongoing projects started by his predecessor in my chiefdom”.

As regards the issue of farmers and herdsmen relationship within his chiefdom HRH Jatau said, “In fact their relationship is very cordial here. If any issue of misunderstanding between the two surfaces we due resolves them amicably.

“As a father of this chiefdom, I don’t judge on sentiment because I am for everybody irrespective of differences in affiliations because we are all created by one God”.

In their separate remarks at the meeting, the District Head of Kube, Mr. John Dangiwa,  the chairman, National Union of Teachers, NUT, Nasarawa State council, Comrade Francis Tete Jatau, sarkin Kukuri Mr. Benjamin Adamu, Sarkin Angwan Pa Mr. Ali Awesu and Sarkin Shinkafa Mr. Ishaku Sabo thanked their paramount ruler HRH Christopher Jatau for his fatherly caring to the entire people of Kube Chiefdom in all ramifications promising him of their maximum cooperation always and ready to obey the government of the day.

They called on Nasarawa State government to assist them in the areas of repairing their respective dilapidated roads and school structures as well as to provide them with some social amenities such as boreholes and electricity.