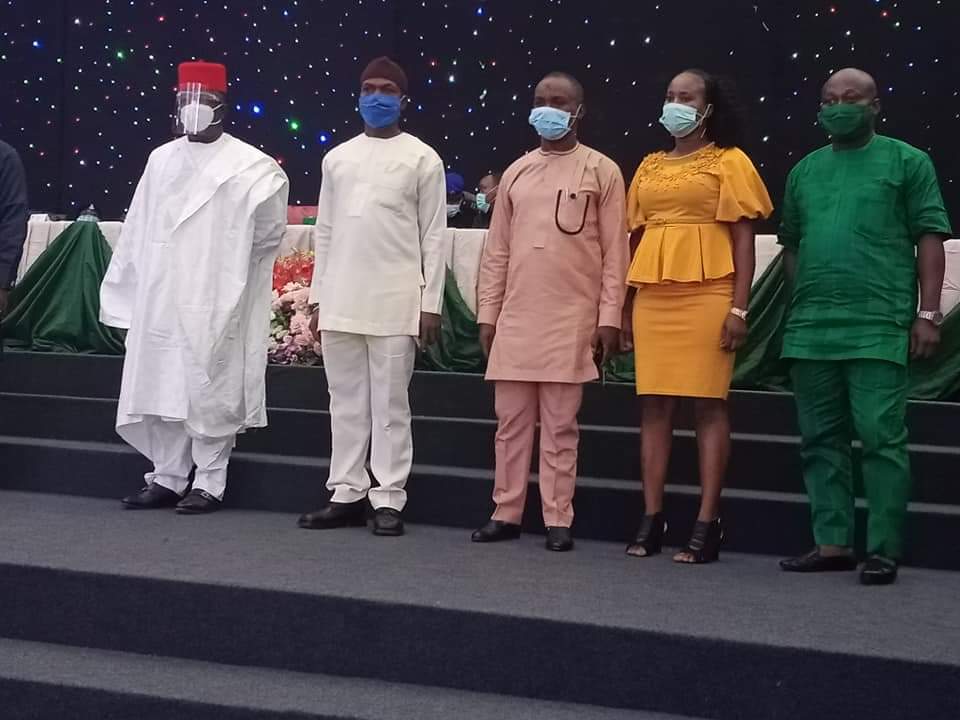 All accountants in the employ of Ebonyi State Government lacking practical knowledge  of Information Communication Technology, and its application in the accounting profession would be redeployed.

Governor David Umahi gave the directive on Thursday in Abakaliki, the State capital during the swearing-in ceremony and inauguration of  some newly appointed Executive Council members, chairmen and members of some Boards in the state.

Umahi who also announced the reshuffle of some cabinet members decried the lacuna and incompetence observed in the State Ministry of Finance as well as the financial departments of some state ministries,  departments and agencies, describing it as shameful.

He explained that the redeployment of the Commisioner for Finance,  Professor Ogbonnaya Chukwu and the Accountant General, Christiana Ukwuta to another area of service in the state was not as a result of any known fraud or incompetence but because of the need to reposition the Ministry for the emerging challenges in the accounting system of the government which was mainly ICT driven.

He charged the new Commissioner for finance, Mr. Orlando Nweze to immediately reorganize the ministry and effect the full ICT compliant system of accounting and auditing in the state, adding that he has given him the freedom to redeploy accountants in line with the programme.

Umahi who congratulated the appointees warned that it was no longer business as usual as anyone found wanting in his or her line of duty would be shown the way out of the administration.

Umahi said : “The Accountant General is a very nice and impeccable character, and same thing with Professor Chukwu, the immediate past Commissioner for finance.

“But we have new innovations in our accounting system, and we have been on this for the past three months and we didn’t find it very easy, neither did my people, the accounting section find it easy.

“At the end of our first financial statement in the month of March, some of my financial team tested positive to COVID-19, and I  directed all EXCO members, my Deputy and myself to go for the test.

“Fortunately and unfortunately, some tested positive but my Deputy, I and the Speaker tested negative.

“But those who tested positive have been treated and discharged.

“It is important to point out that since after that hard work, some of them broke down and were treated of malaria.

“We are finalising the budget review, and if we get this review correct, we will be getting a grant of N 6.3 billion, and that’s why I had to throw myself into it…

“The challenge before our present accounting system is so enormous.and it is mainly ICT driven…

We need excellent people in ICT to man the office of the Commissioner for Finance, and that is what we have done now.

“But effective from today, any accountant that is not ICT compliant must be removed from the MDAs.

“They should be reassigned to the office of the Governor, and that would afford them the opportunity to go and learn ICT.

“They cannot function without ICT.

“It is a shame, a very big one that some MDA Accountants cannot account for how much they received in five months.

“There will be no sentiments about that. “

The Governor formally announced the redeployment of the former Commissioner for Finance , Professor Ogbonnaya Chukwu, to the Ministry of Commerce and Industry while Orlando Nweze was sworn-in as the new Commissioner in the Finance Ministry.

While the former Accountant General, Mrs. Christiana Ukwuta was redeployed as  Permanent Secretary UBEB and Internal Revenue Services, Mrs Mojibade Ekuma was sworn-in to replace her as the new Accountant General.

The former Chief of Staff to the Governor, Chief Emmanuel Offer Okorie was redeployed as the Chairman of Ebonyi Broadcasting Corporation’s Board while the former erstwhile Accountant General and Permanent Secretary of UBEB in the State, Mrs. Queen Agwu was sworn-in as the new Chief of Staff.

Meanwhile, the Commissioner for Information and State Orientation, Barr. Uchenna Orji, who initially acts also as that of Human Capital Development was relieved of the later post and restricted to  Information alone, among others.

Queen Agwu and other representatives of the appointees expressed gratitude and solidarity with the Governor, accepting to discharge their new assignments with utmost diligence and commitment.