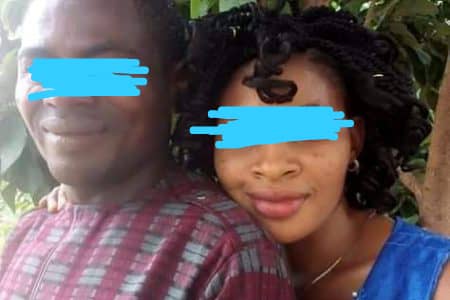 A 48 year old man, Shadrach Nwibo and his wife,  Olamma Nwibo, 28 were on Monday remanded in custody by a Magistrate Court sitting in Abakaliki for alleged murder of one Samuel Aleke.

Aleke, the diseased, was alleged to have been murdered by Nwibo at Ndiechi village,  Onuebonyi community, in Izzi Local Government Area of Ebonyi State on May 23, 2020 over alleged  extra marital affairs with his wife, Olamma, the second suspect.

Nwibo, had met the deceased on his matrimonial bed with his wife on the said date and in the course of fighting the late Aleke was said to have hit his head on the floor and died.

Nwibo and his wife were consequently arraigned before the Magistrate’s Court, sitting in Abakaliki, on one count charge of murder.

The charge read, “That you Shadrach Nwibo ‘m’ and Olamma Mary Nwibo ‘f’ on the 23rd of May, 2020, at Ndiechi Onuebonyi Izzi in the jurisdiction of this Honourable Court did murder one Samuel Aleke ‘m’ aged 43 years and thereby committed an offence punishable under section 319 (1) of the Criminal Code Cap. 33, Vol. 1, Laws of Ebonyi State of Nigeria, 2009…”

According to police prosecutor, ASP Mathias Eze, the offence committed by the duo was punishable under section 319 (1) of the Criminal Code Cap. 33, Vol. 1, Laws of Ebonyi State of Nigeria, 2009.

The Defense Counsel, C.N. Ugadu, appealed to the court to admit his clients to bail.

The prosecuting counsel, led by ASP Eze, however, opposed the application on the grounds that the suspects committed a capital offence, which according to him, was not bailable.

Meanwhile, Chief Magistrate Nnenna Onuoha, in her ruling, noted that the court lacked the powers to adjudicate on the matter.

She ordered that the suspects should be remanded at the Nigerian Correctional Centre, Abakaliki, while their case file, should be transferred to the Director of Public Prosecution for necessary legal action.

The matter was adjourned till July 15, 2020, for hearing on compliance to the Court’s ruling.