APC agrees with Atiku’s opinion, attacks him on economic diversification 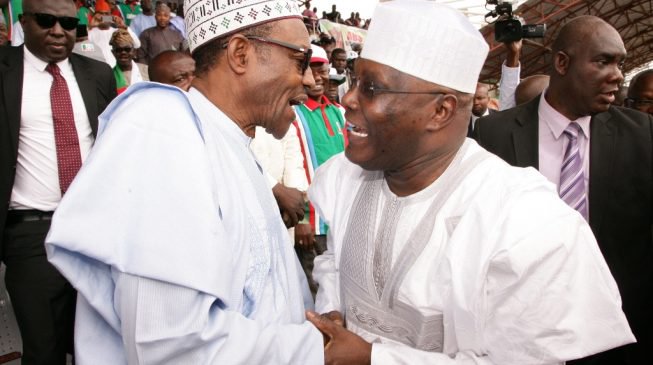 The ruling All Progressives Congress, APC, said it has welcomed the opinion of the leading opposition leader, Alhaji Atiku Abubakar, former presidential candidate of the Peoples Democratic Party, PDP, and former vice president of Nigeria.

APC stated this in a press release made available to media houses on Saturday, May 2, which was signed by its national publicity secretary, Lanre Oniru.

“The All Progressives Congress (APC) welcomes the opinion of the former Vice President, Alhaji Atiku Abubakar and expresses our sincere thanks for the suggestions he made to the President Muhammadu Buhari-led administration on the need to diversify Nigeria’s economy.

“However, we are a bit surprised that the former Vice President failed to acknowledge the bold efforts this administration has made in the last five years towards diversification of the economy and the many positive gains our country has recorded.

“Perhaps, it was an oversight. Or, could it be too inconvenient a truth to admit?

“While we appreciate that Atiku Abubakar is keying into this administration’s policy direction regarding diversification, we are only worried that it took him 13 years after leaving office to realise that the Government under which he served as the Vice President was short-sighted for its failure to faithfully diversify the Nigerian economy.

“Not to be confused, Atiku Abubakar had eight years as a powerful Vice President and Chairman of the National Council on Privatisation with vantage opportunity to lead the country away from its dependence on oil. How Nigeria got worse even when international oil prices were stable and high are matters Atiku Abubakar may still need to address in future.

“For free, we would gladly educate the former Vice President on the several policies this administration has introduced since 2015 to diversify Nigeria’s economy.

“As far back as 2016, President Muhammadu Buhari launched the Anchor Borrowers Programme (ABP), an intervention policy primarily aimed at giving farmers access to finance.This entails the provision of credit for financing the production of rice, wheat, ginger, maize and soybeans in many states of the federation.

“This policy driven by the Central Bank of Nigeria is an initiative that has, in the last four years, provided hundreds of billions of naira for rice farming, cultivation and milling. Few years down the line, Nigeria is now rated the highest producer of rice in Africa, producing over seven million tonnes per annum.

“And just late last year, the APC-led government through the CBN has also made available huge funds to our cotton farmers, a move geared towards reviving our moribund textile factories thereby creating millions of direct and indirect jobs.

“Also, as part of the efforts of the President Buhari-led administration to boost agriculture is the massive successes recorded in the local production of fertiliser. This was one policy personally driven by the President and which has received applause from even his most virulent critics.

“This policy, which is built on a partnership between Nigeria and the Kingdom of Morocco, has led to the resuscitation of 11 blending plants producing about 1.3million tonnes of fertiliser, creation of over 50,000 direct and 150,000 indirect jobs, in addition to farmers having timely access to the product at an affordable price.

“The contributions of agriculture to the overall Gross Domestic Product (GDP) has consistently been on the increase and is being captured by the National Bureau of Statistics (NBS) in the last four years.

“Most heart-warming is the fact that the private sector is keying into the President Buhari’s agenda. An example is the Dangote Group’s ongoing test running of its $2billion fertiliser plant, which would make Nigeria meet all its domestic demand and also make our country a net exporter of fertiliser.

“So, we ask Alhaji Atiku Abubakar: if all these major achievements are not commendable efforts towards diversification of the economy, what are they?

“Atiku Abubakar said in his article that land border closure is an “insane” policy. We believe that the former Vice President did not consider his position on this matter well enough as the facts leading to the closure of the border clearly justify the temporary closure.

“Perhaps, Atiku Abubakar is now at pain that the trans-border security challenge our country was facing and from which he was making a huge political capital is now mostly curtailed. He should have realised the contradiction in his new propositions and the counterproductive business of smuggling of foreign goods into our country through our borders.

“How does the former Vice President expect Nigeria to be a productive economy if we continue to allow neighbouring countries to jeopardise our efforts to grow our own economy?

“Alhaji Atiku Abubakar may wish to know that the policy he has unfortunately chosen to label as “insane”  has led to a significant spike in rice production across the country, opening up of hundreds of rice mills, indigenous manufacturing firms are sourcing their raw materials locally, boom in poultry farming, with Nigerians now patronising locally made food items like never before and, in the process, boosting the income of farmers and local producers.

“It is heart-warming to know we are coping well as the Coronavirus pandemic and the resultant lockdowns are testing our country’s capacity to feed itself. We have been able to meet the pandemic induced surge in demand for foods only because the APC administration has been implementing policies targeted at expanding the capacity of our farmers and the other players in the allied industries.

“We ask Atiku Abubakar; where would we have gotten the farm produce for palliatives and feed our people during the lockdown if we had not taken the courageous route of looking inwards while curtailing sabotage from neighbouring economies?

“Since the launch of the National Action Plan on Ease of Doing Business, being driven by the Presidential Enabling and Business Environment Council (PEBEC), the APC government has aggressively implemented major reforms by reducing the challenges faced by the Minor, Small and Medium-sized Enterprises (MSMEs) in accessing credits, paying taxes, amongst others.

“According to industry reports, Nigeria startups attracted $122million out of the $493million in funding for African startup sector in 2019. In the latest World Bank ranking, Nigeria jumped 15 places from her previous 2019 spot and was also named amongst the 10 most improved economies in the world.

“In February this year, the Vice President, Prof. Yemi Osinbajo, held a meeting with all federal agencies that are playing one role or the other in the MSMEs sector. At the meeting, the Bank of Industry (BoI) approved a $20 million Technology Fund for young innovators, while the CBN is offering a N90billion soft loan facility for small scale agricultural enterprises.

“All these and more are part of this administration’s drive at changing the nation’s decades of mono economy status.
In the fight against public sector corruption, the launch of the Open Treasury Portal (OTP) complements other initiatives such as the administration’s full implementation of the Treasury Single Account (TSA) which has increased the level of accountability, transparency in financial resources of government and plugged leakages.

“Importantly, we no longer borrow money to pay salaries, but to build infrastructure, particularly roads, rails and airports. The era of phony and abandoned contracts is in the past, contracts awarded are now strictly monitored to ensure full value for released contract sums.

“For instance, in the road, railway and aviation sectors, the President Muhammadu Buhari-led administration has recorded milestones that are visible to see and feel. While all the 36 states can boast of at least one major road project being undertaken by this government, there are also legacy projects, which include the Abuja to Kano expressway, Lagos to Ibadan expressway reconstruction, and the ongoing Second Niger Bridge.

“On railway, this administration’s record is unmatched. It is to this government’s credit that the Abuja to Kaduna Standard Gauge rail line was completed in 2017, while the Itakpe to Warri railway, which had been abandoned since 1987 by successive administration has been completed and is due for commissioning.

“Even more commendable is the near completion of the Lagos to Ibadan Standard Gauge rail, construction of which started about three years ago.

“While we consolidate our rank as Africa’s biggest economy, aided by our re-emergent manufacturing sector, we continue to climb in global ranking on the ease of doing business. Our investment and focus on agriculture where we have comparative advantage has been a huge success. We are beginning to look inward and grow our SMEs. We now have an army of entrepreneurs supported by government and creating wealth and livelihoods.

“Finally, the APC welcomes Alhaji Atiku Abubakar’s concerns and the fact that he is beginning to make a good attempt at sounding like a statesman. Going forward, this is the least we expect from him, even as we hope that he will be more forthcoming in future, in appreciating and commending the positive steps, while offering suggestions on what more can be done.

“We, however, urge him to continue to do this without sounding overtly sanctimonious.”