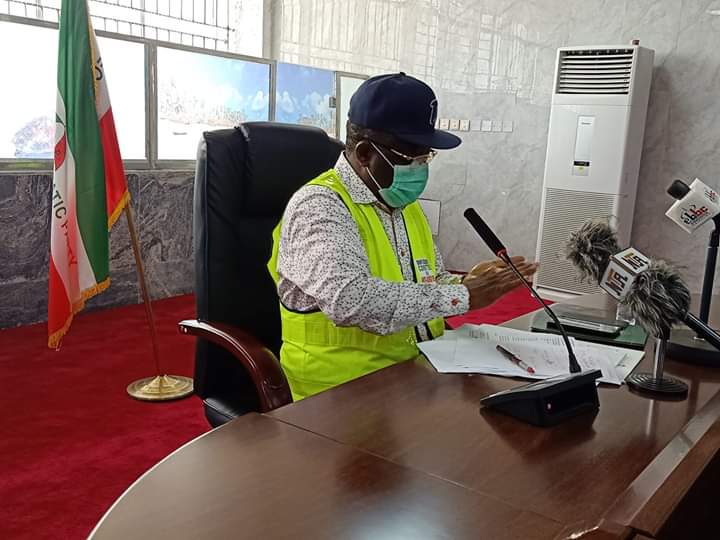 Three days after relaxing the ban on religious activities, the Ebonyi State government has rescinded its decision, thereby reinstating the total ban as it were.

This development was part of outcome of Governor David Umahi’s State wide broadcast on the state of affairs in the State, held at the new Government House,  Abakaliki on Saturday.

Umahi explained that the decision to revoke the earlier lifted ban was in response to pressures from concerned quarters on the potential danger in so doing, considering the continued ravaging effect of the COVID-19 pandemic.

He regretted that some leaders of religious organizations were haste at defaulting the rules and regulations marshaled out by government to that effect, warning that it was no longer business as usual.

Governor Umahi however, allowed that Easter Sunday Services be conducted by all Churches tomorrow, after which their doors should be locked till further notice.

Furtherance to that, the Governor also banned the operation of all commercial motorcyclist popularly known as ‘Okada’ with immediate effect, across the State for their continued aiding and abetting cross-border movements against government orders.

He directed that henceforth, any vehicle: cars, busses, lorries and motorcycle found indulging in such unlawful smuggling of persons into the state should be impounded by security operatives and auctioned immediately by government for contravening the laws of the state.

The Governor who announced government’s decision to boost the earlier approved palliative fund of N1 billion with additional N500 million said the addition has become necessary to cater for more essential commodities for the people.

He however warned the Committee handling the palliatives to distribute the items fairly without recourse to political party affiliations, warning that he would hold the Council Chairmen, Development Centre Coordinators and other political appointees culpable for any leakages in their areas.

Umahi further directed the immediate distribution of all available protective masks and hand sanitizers to the citizens, including those acquired by government and those donated to it by donor organisations.

He urged the Committee on palliative measures headed by the Speaker of the State House of Assembly, Francis Nwifuru, to redouble its effort towards massive production of more protective masks.

Meanwhile, Governor Umahi has extended the existing stay-at-home order for some category of civil servants to the end of April, 2020 to further mitigate the Coronavirus pandemic.

He also directed the State Chief Judge to liaise with the Correctional Service in the State to review the cases of prisoners with the view of releasing those with lighter offences and limited terms.

According to him, the essence was to decongest the Correctional Centers as a means of further checking the infectious pandemic.

While further directing the Council Chairmen and Coordinators to compile and update the list of recent returnees in their domain for a follow-up action, the Governor urged the civil servants to seize the opportunity provided by the partial lock down to engage in intensive farming activities.

He emphasized that the aftermath of the COVID-19 pandemic demands aggressive agricultural and economic activities to cushion.