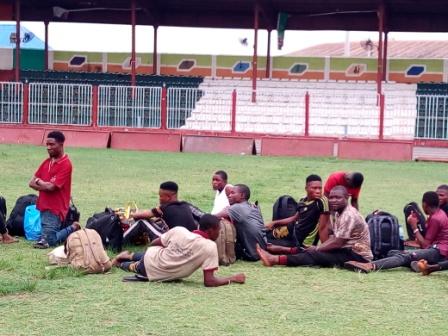 No fewer than 16 entrants from Lagos into Ebonyi State against the state government’s entrance prohibition order were on Wednesday isolated at the Ngele Oruta Township stadium.

The illegal entrants comprising mainly youths and the  middle-aged were among the  over 500 commuters arrested across Ebonyi State borders by the State Anti-Coronavirus team on Wednesday, most of whom were indigenes of the State.

Governor David Umahi while on monitoring tour at the stadium directed that samples be taken from the entrants to determine their COVID-19 status before being discharged to their various destinations.

The tests are to be performed at the newly kitted KOVID-19 test Laboratory at the Virology Centre in Abakaliki.

He further directed that they be adequately taken care of in terms of feeding and other necessities, admonishing them not to attempt escaping from the centre as the measure was for their best interest.

Umahi who queried the youths on their various engagements in Lagos discovered that most of them were into menial works, petty and street trading.

He challenged them to return home as they would have fared better taking advantage of the on-going transformations in the State to better develop themselves.

Meanwhile, the other defaulters, grouped according to their local government areas of destination were later discharged into government sponsored buses to their various homes.

Recall that since the Coronavirus scare leading to government’s order for border closure in the States, large numbers of defaulters, male and female; young and old were being arrested on daily basis.

Most of the defaulters, especially those whose origins were certified free have always been discharged after preliminary investigations, due documentation of their bio-data, phone numbers and contact details for follow-up measures.