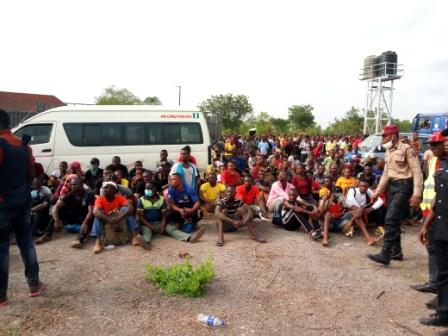 Governor David Umahi of Ebonyi State has identified compromise by security agencies as well as ignorance on the part of the populace as a challenge in the fight against Corona Virus in the State.

The Governor raised the concern on Monday while responding to journalists on the outcome of his compliance monitoring tour of major State borders.

The Governor who led the State Anti-Corona team to major entrance/exit points in the State, including the Enugu/Ebonyi boundary at Nkalagu, described the experience as tough.

He decried the development whereby some indigenes and others still smuggle themselves into and out of the State in spite of the border closure and existing prohibition order, alleging compromise by Security Agencies.

He called on other neighbouring States to join in border closure and monitoring, noting that such corporate action would drastically reduce the present challenges faced by the State in the fight.

Umahi said: “The truth is that whether Security Agencies or some of our people do not appreciate the degree of this problem.

“If they do, they will stop the little compromises.

“It has been quite very tough but as soon as other states have their borders locked down, it would become easier for us.”

The Governor who veered-off the route to inspect the State Isolation Centre at the Unity Square, Abakaliki, which  has reached 98 percent completion, further explained that Mock testing have commenced at the newly kitted part of the Virology Center in the State preparatory to full operation from 1st April.

By implication, Ebonyi would from the date, house the seventh Coronavirus testing point in the Country.

Meanwhile, the Governor during the tour, discharged over 1000 defaulting passengers trapped at the Idodo, Enugu/Nkalagu,Ebonyi border after due preliminary investigations were performed on them.

Entrants into the State, numbering over 300 were however taken into isolation at the Ngele Oruta Township Stadium for further investigations.

Recall that over 55 persons who flouted the no entry, no exit order of Ebonyi State government were earlier arrested  by the State anti-Corona Virus Team headed by Governor David Umahi.

The defaulters arrested between the early hours of Sunday and Monday afternoon were isolatied at the Ngele Oruta Township Stadium where they would be observed for 14 days to ascertain their COVID-19 status.

Among those arrested were about 17 persons illegally crossing into the State from neighbouring States of Abia, Anambra, Cross River, Delta and Rivers States