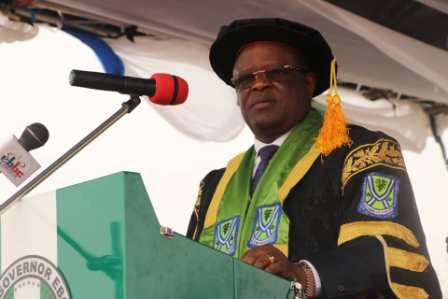 Ebonyi State government said it has completed modalities to begin local production of dialyzers for treatment of renal patients.

Governor David Umahi disclosed this on Saturday in Abakaliki while speaking at the 7th to 11th combined convocation ceremony of Ebonyi State University.

The Governor noted that the achievement was aimed at not only stemming the rising tide of medical tourism abroad with its attendant capital flights but also to guarantee quality  and affordable healthcare delivery to its citizens and beyond.

He further disclosed that the ultramodern University Teaching Hospital built for the University by the State government would be commissioned soon, while the sum of over N3b has been approved for commencement of its equipment with medical facilities.

According to the Governor, the hospital has been designed to provide  specialised health and medical services in line with global best practices.

Further explained: “We are building a teaching hospital and will soon commence the production of dialyzers, which is the most expensive part in the management of dialysis for kidney patients.

“We are building kidney transplant, liver transplant there and we have dialysis Centres.

“We also have the best eye centre there.

He finally admonished the convoking students to be good ambassadors of both their alma mater and the State in general.

The Vice Chancellor of the University, Professor Chigozie Ogbu in his welcome address, said the overall objectives of this administration was to develop the university to rank among the best citadels of learning in the world with excellence in teaching, learning, research, character and community service.

He noted that the university under the current administration has made significant progress and growth in the area of learning and academic excellence.

Ogbu added: “We have embarked on strengthening our programmes in line with the National Universities Commission standards, and creating a conducive environment for learning”.

Others were a former Squadron leader and General Officer Commanding 81 Division of the Nigerian Army, Major General Obi Umahi (retired) as well as a notable industrialist Cletus Ibeto and host of other notable achievers.