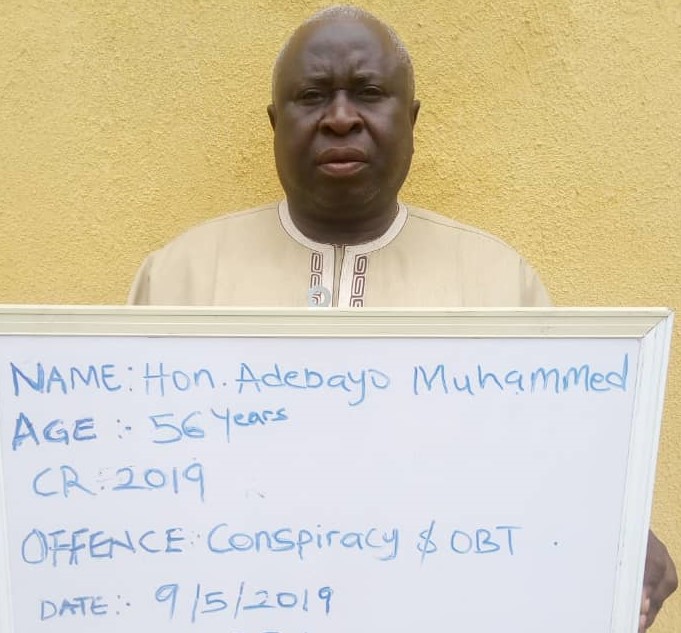 A former Kwara State House of Assembly member, Mohammed Adebayo, on Thursday, February 6, 2020 failed to stop the criminal proceedings brought against him by the Economic and Financial Crimes Commission, EFCC, Ilorin Zonal Office.

Adebayo represented Molete Constituency in the state’s house of assembly.

According to a press release issued by Mr. Tony Orilade, Acting Head, Media & Publicity, February 6, 2020, the EFCC had sometime in July 2019 arraigned the embattled ex-lawmaker before Justice Sikiru Oyinloye of Kwara State High Court, Ilorin, on a  six-count charge bordering on land fraud.

One of  the charges against him reads: “That you, Mohammed Adebayo, sometimes in July 2013 in Ilorin within the jurisdiction of this honourable court, with intent to  defraud, obtained the sum of N950,000 from one Mary Omowunmi Kolade on the false pretence that three plots of land (situated at Malete, Moro Local Government Area of Kwara State) which  you sold to her belonged to you, a representation you knew to be false, punishable under Section 1 of the Advance Fee Fraud and other Fraud Related offences.”

He had pleaded “not guilty” to all the charges.

At the last adjourned date, defence counsel, I. Abdulazeez drew the attention of the judge to a letter written by the nominal complainants in the case.

According to him, “the nominal complainants have written a letter to the Economic and Financial Crimes Commission (EFCC) on their intention to withdraw their petition against Adebayo.”

He thus prayed the court to strike out the case and discharge the defendant.

In his response to the prayer of the defence counsel, counsel to the EFCC, Sesan Ola, opposed the application to have the case stricken out, stating that the EFCC was the complainant in the matter, and had no intention of withdrawing from the case.

He further argued that the application lacked merit, and “the nominal complainant” was not known in law.

“The EFCC is the complainant in this case, and we have two witnesses in court, ready to testify,” he said, urging the court to reject the application of the defence.

While rejecting the application of the defence, Justice Oyinloye stated that, “This application lacked merit,  it is only the attorney general of the federation that has powers to withdraw the charge, not the nominal complainants or an accused person.”

He described the steps taken by the defence and the “nominal complainants” as “very weird, uncanny and strange” in the administrative criminal justice system.

The case was adjourned till February 26, 2020 for the prosecution to open its case.