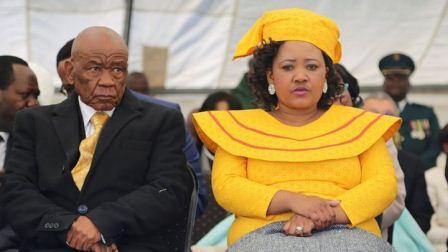 By Moses Okorie with Agency Report

The wife of the prime minister of Lesotho has been formally charged in court with murdering his previous wife.

First Lady Maesaiah Thabane has not yet been asked to plead. She surrendered to police on Tuesday for questioning.

Prime Minister Thomas Thabane has also been questioned. His estranged wife, Lipolelo Thabane, was shot dead outside her home in the capital Maseru two days before his inauguration in 2017.

The couple was involved in bitter divorce proceedings at the time.

Maesaiah Thabane has also been charged with the attempted murder of Thato Sibolla – a family friend who had been travelling with the deceased at the time.

The case was postponed to 28 February and Mrs Thabane has been granted bail of about $67 (£52).

An arrest warrant was issued for 42-year-old Maesaiah Thabane on 10 January after she disappeared.

She was “picked from the border” with South Africa on Tuesday after an arrangement between her lawyers and police, police spokesman Mpiti Mopeli told AFP news agency.

Lipolelo Thabane, 58, had been living apart from her husband since 2012. One evening in June 2017 while returning home, she was ambushed, shot several times at close range and died on the side of a road.

The murder shocked the nation. Mr Thabane described it as a “senseless killing” in his inauguration speech.

Wearing a bright orange dress, the first lady cut a lonely figure in the dock as the magistrate read out the charges against her.

After nearly a month on the run – the law finally caught up with Maesaiah Thabane.

She is accused of masterminding the assassination of the prime minister’s estranged wife, Lipolelo Thabane, and the attempted murder of a family friend Thato Sibolla.

They were ambushed in the outskirts of Maseru, a stones-throw away from Lipolelo Thabane’s home. The two were shot several times. Lipolelo Thabane died on the scene, but Ms Sibolla survived the shooting and is expected to play a pivotal role in the state’s case against the first lady.

For years, there was mystery around the attack but last month the police revealed they suspected that the prime minister and his wife were involved.

The prime minister was also taken in for questioning after police linked a call made at the crime scene to his mobile. He has not been charged.