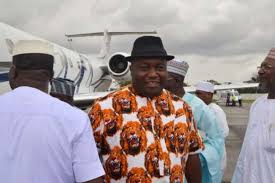 The Independent National Electoral Commission, INEC, and the National Assembly have been bared by a Federal High Court sitting in Abuja from issuing a certificate of return Obinna Uzor or swearing him in, in place of Senator Ifeanyi Ubah over the disputed Anambra South Senatorial District.

The court ordered the INEC to withdraw the certificate of return issued to Mr Ubah and to issue a fresh certificate to the candidate of the Peoples Democratic Party, Obinna Uzoh who came second in the election, as the senator elect of the district.

The Friday ruling against the Capital Oil owner was given by Justice Bello Kawu.

The latest order reaffirms the pronouncement the court had given in 2019.

The order was given in the suit filed by Mr Uzoh challenging Mr Ubah’s victory on the grounds that he (Mr Ubah) allegedly presented a forged National Examination Council (NECO) certificate to INEC.

The lawmaker, however, approached the court to set aside the judgment on grounds that he was neither given fair hearing nor served with the court process and hearing notice in the suit before the court delivered the judgment against him.

The judge thereafter ordered a stay of execution on December 4, restraining Senate President Ahmad Lawan from swearing in Mr Uzoh, pending the hearing and determination of the motion challenging the verdict.

During the resumed court session on Friday, the judge held that Mr Ubah’s application to vacate its judgment lacked merit, and accordingly dismissed it.

Another motion brought by Chris Uba, claimant to the PDP senatorial ticket, seeking to be joined as an interested party in the substantive suit marked CV/3044/2018, was also dismissed.

He said the case at the FCT high court is a pre-election matter that the court has no jurisdiction over. He also said he will appeal against the judgment.